Gravely concerned over "continuing violence, strife and deteriorating humanitarian situation" in Libya, India on Sunday regretted the air strikes by United States-led coalition and called upon all parties to abjure use of force and resolve their differences through peaceful means.

"India views with grave concern the continuing violence, strife and deteriorating humanitarian situation in Libya. It regrets the air strikes that are taking place. The measures adopted should mitigate and not exacerbate an already difficult situation for the people of the country," ministry of external affairs said in a statement.

"Spoke to Ambassador (M) Manimekalai in Tripoli a short while ago. She is cool and calm. Harrowing Saturday night though' with jets screaming above, she says," Foreign Secretary Nirupama Rao tweeted.

India hoped that the air strikes would not harm innocent civilians, foreign nationals and diplomatic missions and their personnel, who are still in Libya.

"India calls upon all parties to abjure use of or the threat of use of force and to resolve their differences through peaceful means and dialogue in which the UN and regional organisations should play their roles," the ministry said in a release.

The US-led military coalition on Sunday hit Libyan defence targets with cruise missiles and launched air attacks as Libyan leader Muammar Gaddafi vowed to open his arms depots to the people to retaliate against the Western "aggression".

They were joined by the US and the UK who fired over 110 Tomahawk missiles from American and British ships and submarines, hitting about 20 Libyan air and missile defence targets in the capital Tripoli and along the Mediterranean coast, US Navy Vice Adm William Gortney said at a Pentagon briefing.

The UN Security Council had on Thursday adopted a resolution, calling for an immediate ceasefire and authorised "all necessary measures" for protecting civilians in Libya from Gaddafi's forces.

Meanwhile, the Communist Party of India-Marxist on Sunday termed as a "dangerous act of aggression" the aerial strikes in Libya by US-led coalition forces and said it was a "calculated intervention" in an internal conflict.

The party asked all democratic and progressive forces in India to strongly protest yet another military aggression by America and its allies on an Arab-African country.

In a statement by CPI-M politburo, the party said, "The military strikes by the forces comprising France, Britain and the United States is a dangerous act of aggression. They are now repeating what they did in Iraq, which led to deaths of millions of people and large scale destruction. Already forty eight people are reported dead in the attacks on the first day," it said.

Despite the rhetoric about protecting the Libyan people, it said this act of aggression is a "gross violation" of Libya's sovereignty and a "calculated intervention" in an internal conflict to bring about a change of regime.

"The hypocrisy of the Western powers can be seen in their connivance with the Saudi military intervention to crush the popular and peaceful revolt in Bahrain. The West has no compunction in resorting to force to secure its interests in oil-rich Libya and the Middle East," it said. 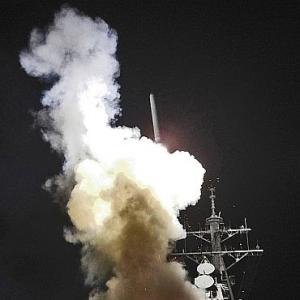