India ready with 'tiny eyes in the sky'

They could be termed as tiny spies in the skies. Weighing just 300 gms and 300 millimetres long, Micro Air Vehicles (MAVs) developed by India's aerospace scientists have a variety of applications, mainly in surveillance and disaster management.

These vehicles have a range of two to five kms, fly some 100 to 200 metres above ground for 30-40 minutes and take pictures of what's happening below. Significantly, they are not easily susceptible to radar detection as they are "not all of metal" and carbon fibres are used in making them, says Lieutenant General (Dr) V J Sundaram, one of the key scientists behind its conception. In a typical battlefield scenario, MAVs come in handy as they can be sent a couple of kms ahead to survey the area where they would make an aerial circle, take images and come back, scientists said.

"It (an MAV) may be of the order of Rs seven lakh to Rs eight lakh, with 30 to 40 per cent of the cost being sensors", Sundaram, a former Director of Defence Research Development Organisation, told PTI in Bengaluru. MAVs, capable of carrying mission-specific sensors, are like any other (normal) aircraft -- they have navigation, control and guidance. "It rolls on the ground. It can fly also. Everything can be done".

Research and development in MAVs was taken up a decade ago and has since been actively promoted by the National Design and Research Forum (NDRF), of which Sundaram is Advisor (Micro & Nano Systems), with support of Aeronautical Research and Development Board (AR&DB),

Now the MAV programme, a national research initiative, is about to be taken to the next level. Sundaram said a Rs 98
crore proposal has been submitted to the Government to approach the project in an integrated fashion and take it to the users in a big way. "We have been doing little by little at various places. Now we want it to come as an integrated programme", he said. "You have to make it (MAV) rugged to withstand winds".

He expects funds to come in from the Department of Science and Technology, DRDO and CSIR and from potential users such as the National Disaster Management Authority. More than defence applications such as intelligence gathering by the Army, scientists are enthusiastic while talking about its benefits in the area of disaster management.

For instance, in the case of floods, such MAVs can be sent to the affected areas which can't be reached by other modes so
that they can take aerial pictures and come back.It would also come in handy in incidents of major fires and gas leakage.

Sundaram said scientists want to make MAVs simple to deploy, without the help of specialists, so that they can be used, even at district levels. "I want to give it to Tahsildars. Every district must have it. They must be able to use it. I am pushing it more for disaster management".
Ramnath Shenoy in Bengaluru
Source: PTI© Copyright 2021 PTI. All rights reserved. Republication or redistribution of PTI content, including by framing or similar means, is expressly prohibited without the prior written consent.
Related News: J Sundaram, Micro Air Vehicle, National Design and Research Forum, DRDO, CSIR
SHARE THIS STORY
Print this article 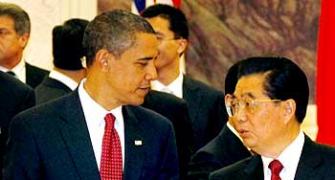 India, US ink two IPR agreements
The lessons not learnt from Bhopal 'Citizens should never be satisfied with cribbing'