Airports were geared up to receive Indian nationals stranded abroad due to the coronavirus lockdown with Air India's repatriation flight from Abu Dhabi to Kochi on Thursday set to kickstart the country's biggest evacuation exercise by air and sea.

The AI's non-scheduled commercial flight with around 200 passengers on board is expected to land at the Kochi International airport in Kerala at 9.45 pm, as logistical arrangements and strict health protocols were put in place at several airports including in Thiruvananthapuram, Delhi and Mumbai.

Jishnu, a passenger from Abu Dhabi who was among those in the first lot to fly out of the United Arab Emirates, was elated that he would be able to return to his home state.

"I am very happy to have got the ticket. I was informed yesterday that I could travel", he told a television channel on Wednesday.

From the Gulf countries to Malaysia and the UK to the US, the multi-agency operation christened 'Vande Bharat Mission' will see the state-owned AI operate 64 flights till May 13 in the first phase to ferry around 15,000 Indian nationals from 12 countries.

Private Indian airlines may join the repatriation effort after May 13.

As many as 10 flights are planned to be operated on the first day from various destinations abroad. Besides Kochi, the other cities where the flights are scheduled to land on Thursday are Kozhikode (Kerala), Mumbai, Delhi, Hyderabad, Ahmedabad and Srinagar. Only asymptomatic passengers will be allowed to board the flights.

The Cochin International Airport and Cochin Port have made all arrangements to receive the returning expatriates, Ernakulam District administration said.

Thermal scanners have been erected at the airport for the screening of the passengers and for quarantine facilities, while 4,000 houses with water, electricity and bath attached facilities have been arranged in Ernakulam district.

The pilots and the cabin crew of the first batch of Air India Express evacuation flight were imparted training on handling of in-flight operations at the time of the COVID-19 pandemic.

Doctors and nurses of a government medical college hospital in Kochi along with experts in handling COVID-19 patients briefed the 12 airline staff including four pilots.

The pilots and cabin crew were provided training on donning and doffing of Personal Protective Equipment suits, infection control practices to be followed in-flight and also the management of anticipated health emergencies during the flight, hospital authorities said.

A practical demonstration of both donning and doffing of PPE suits according to the protocol was also given to the crew.

"The training given by GMC Ernakulam has helped to build up the confidence level of the entire crew considerably and we are now fully confident to undertake the rescue mission," said Captain Paartha Sarkar.
For those arriving at Thiruvananthapuram, quarantine facilities have been arranged in six taluks to accommodate over 11,200 people and the government will bear the expenses.

Hotel rooms have been arranged for another 6,400 people for which they will have to pay, an official release said.

Various hostels, hotels, auditoriums have been taken for quarantine facilities of the Non-resident Keralites.

While all arrangements have been made by the state government to receive the NRKs, there is some confusion about the number of days passengers will have to undergo quarantine on arrival.

The state government has said passengers from abroad will have to undergo seven days quarantine on arrival at government arranged institutions and undergo tests after a week.

If found symptomatic, they will have to go to hospitals and those whose samples are found negative will be allowed to leave for home where they have to strictly follow home quarantine.

But as per the Centre's guidelines, they will have to undergo 14 days institutional quarantine.

Chief Minister Pinarayi Vijayan has said it was "dangerous" to bring back stranded NRKs to the state without any COVID-19 tests as it would lead to spreading of infection.

He wanted the Centre to ensure that the NRKs undergo the tests before emplaning for their respective states.

Vijayan has also written to Prime Minister Narendra Modi, highlighting the state's concern on the matter.

There should not be any lapse in following globally accepted health protocols lest there be a setback in the state's efforts to prevent community spread of COVID-19, Vijayan had said.

The Delhi government issued guidelines for screening and handling of repatriated passengers at the airport to reduce the possibility of spread of COVID-19.

Passengers returning to Delhi airport will be quarantined in a paid facility for 14 days from their date of arrival, it said.

Telangana chief secretary Somesh Kumar held a review meeting on arrangements for the arrival of the state's natives.

"The chief secretary informed that seven flights from six countries with about 2,350 passengers are likely to arrive in Hyderabad," according to an official release issued in Hyderabad.

A total of 1,000 people are planned to be evacuated in the first trip in naval ships 'INS Jalaswha' and 'INS Magar', a Navy release said. The evacuated people will disembark in Kochi, it added.

The largest-ever civilian evacuation was carried out by India in 1990 during the first Gulf war-- between Iraq and Kuwait--when almost 1.7 lakh Indian nationals were brought by air from Kuwait.

The 64 AI flights will be landing in 10 Indian states -- 15 in Kerala, 11 each in Tamil Nadu and Delhi, seven each in Maharashtra and Telangana, five in Gujarat, three each in Karnataka and Jammu and Kashmir and one flight each in Punjab and Uttar Pradesh.

The flights would be operated by Air India and its subsidiary Air India Express to repatriate Indians from 12 countries-the UAE, the UK, the US, Qatar, Saudi Arabia, Singapore, Malaysia, Philippines, Bangladesh, Bahrain, Kuwait and Oman.

The government has already evacuated about 2,500 stranded Indians from China, Japan, Iran and Italy in the last couple of months after the outbreak of coronavirus in those countries. 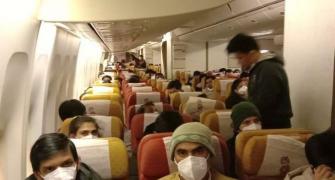 Special evacuation flights for Indians in US this week