India has decided to partially lift a ban on export of anti-malarial drug hydroxychloroquine, paving the way for its supply to the United States and several other countries hit hard by the coronavirus pandemic. Government officials said India would export hydroxychloroquine and paracetamol on a case-by-case basis to the countries which have already placed orders for them after meeting the domestic requirements.

The decision to partially lift the ban on hydroxychloroquine came to the fore hours after US President Donald Trump warned of retaliation if India does not heed to his request to supply the drug, cited by him as a viable therapeutic solution to fight coronavirus infection.

In a telephonic conversation with Prime Minister Narendra Modi on Sunday, Trump sought supply of hydroxychloroquine to the US.

"In view of the humanitarian aspects of the pandemic, it has been decided that India would licence paracetamol and HCQ in appropriate quantities to all our neighbouring countries who are dependent on our capabilities," said Anurag Srivastava, spokesperson in the ministry of external affairs.

"We will also be supplying these essential drugs to some nations which have been particularly badly affected by the pandemic," he added, responding to queries on the issue.

On March 25, India banned export of hydroxychloroquine in the midst of views in some quarters that the drug could be used to fight COVID-19. India is the largest exporter of the drug.

It is learnt that high-ranking officials of India and the US were engaged over the issue of supply HCQ to the US by certain Indian companies following telephonic conversation between Modi and Trump and the decision to ease restrictions on export of the drug was result of a process.

The assessment in the government on Trump's comment on "retaliation" is that his response was not pre-meditated and that it was an instantaneous reaction by the US President when put on the spot.

There was indication that the decision to lift the partial ban on the two drugs was taken at a high-level meeting last night.

Hydroxychloroquine is and inexpensive drug used to treat malaria. India is the largest producer of the drug globally.

"India has always maintained that the international community must display strong solidarity and cooperation. This approach also guided our evacuation of nationals of other countries," Srivastava said.

India is learnt to have received requests from at least 20 countries including its immediate neighbours Sri Lanka and Nepal for supply of hydroxychloroquine.

"Like any responsible government, our first obligation is to ensure that there are adequate stocks of medicines for the requirement of our own people," the MEA spokesperson said.

In order to ensure this, he explained, some "temporary steps" were taken to restrict exports of a number of pharmaceutical products. He said a comprehensive assessment was carried out about possible requirements of various drugs under different scenarios.

"After having confirmed the availability of medicines for all possible contingencies currently envisaged, these restrictions have been largely lifted," he said.

He said the Directorate General of Foreign Trade has notified lifting of restrictions on 14 drugs on Monday.

"With regard to paracetamol and hydroxychloroquine, they will be kept in a licensed category and their demand position would be continuously monitored," Srivastava said.

"However, the stock position could allow our companies to meet the export commitments that they had contracted, he said

The Indian Council of Medical Research has recommended the hydroxychloroquine for those involved in the care of suspected or confirmed cases of the coronavirus.

Global scientists, racing against time to find either a vaccine or a therapeutic cure to the virus, have begun testing hydroxychloroquine and chloroquine as options for potential COVID-19 treatments.

The US Food and Drug Administration last week issued an Emergency Use Authorisation for the prescription of the drug in certain circumstances.

In addition to New York, COVID-19 patients in several States are being treated with hydroxychloroquine, including Michigan and Texas.

According to Trump, the drug is yielding positive results. If successful, he said that it would be a gift from heaven.

Lifesaving drugs should be made available to Indians first: Rahul

Congress leader Rahul Gandhi said on Tuesday that India must help all countries in their fight against coronavirus but lifesaving medicines should be made available to Indians first.

"Friendship isn't about retaliation. India must help all nations in their hour of need but lifesaving medicines should be made available to Indians in ample quantities first," he said on Twitter.

Gandhi's reaction came after the MEA said that India would to export anti-malarial drug hydroxychloroquine to several countries including those in the neighbourhood on a case-by-case basis in sync with its commitment to the international community to fight the coronavirus pandemic. 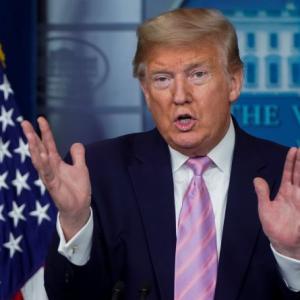