'India is Karmapa's second home, he is happy here'

The police on Sunday questioned the Karmapa and also arrested two more persons in connection with the seizure of foreign currency worth over Rs 7.5 crore from the offices of a trust backed by him.

The Karmapa denied any Chinese links and said the charges against him were 'grossly speculative and without foundation'.

A team of state police officers put nearly 50 questions to Karmapa Ogyen Trinley Dorje at Gyuto Monastery at Sidhbari but he feigned complete ignorance about the foreign currency and other documents recovered from there.

The police said they had given him the set of questions pertaining to the recovery of money and functioning of the monastery. But he completely dissociated himself with the developments and maintained that the affairs of the trust were managed by Shakti Lama and Gompu Tshering and his role was only confined to 'preachings' as a religious head.

The team, led by Additional Superintendent of Police, Una, K G Kapoor, gave the questionnaire that was in English and he replied through an interpreter, Inspector General of Police P L Thakur told PTI. Thakur said investigations were going on and the Karmapa might be questioned again after more information and inputs were available.

Karmapa denied all allegations and said the money was donated by devotees, who come from all over the world and belonged to the trust.

Dharamsala-based businessman K P Bhardwaj and Manager of Ambala branch of the Corporation Bank D K Dhar were arrested on Saturday night following raids conducted at the residence and hotel of Bharadwaj and clues provided by him during questioning with regard to the money trail, the IGP said.

With this, the number of people taken into custody has risen to five.

Backing the Karmapa, the Dalai Lama told reporters in Bengaluru, "He (Karmapa) is an important Lama" and demanded a thorough probe into the seizure of foreign currency.

Apparently explaining the huge Chinese currency haul, the Dalai Lama said, "The Karmapa has many devotees including from China.. Some money would have naturally being received by him. There has been some negligence.  (It is) better now to have a thorough investigation."

A statement by the Karmapa's office said, "We categorically deny having any link whatsoever with any arm of the Chinese government and like to state that the allegations being levelled against the Karmapa and his administration are grossly speculative and without foundation in the truth as everyone who knows the history of our lineage and struggle is surprised by the allegations."

The replies of Karmapa were identical to the contents of the statement issued by Karma Chungyalpa, deputy general secretary and spokesperson of the Karmapa Office. Karma said, "Repressive measures including pressure put by China on Tibetan spiritual and temporal head, the Dalai Lama, were the reasons for the Karmapa's escape from Tibet."

He further said, "Monasteries across the world accept offerings from devotees in various forms and there is nothing surprising, new or irregular in this. A representative of Dalai Lama's office underlined this yesterday and the cash in question under the current investigation by the police is offerings received for charitable purposes from local and international disciples from many different countries wishing to support Karmapa's various charitable activities and any suggestion that these offerings were to be used for illegal purposes is libellous."

Referring to the recovery of Chinese currency, the statement said, "About the Chinese currency, we can say that his Holiness has a large following of Tibetans who make donations in Chinese currency. The fact is that the Karmapa has millions of followers around the world, who hold him in the highest esteem and reverence. All our dealings across the world are honest and completely transparent and anything else would be contrary to the Buddhist principals that we live by."

On the two arrests, the IGP said Bhardwaj had claimed that the Rs one crore recovered from the vehicle was paid by the Karmapa's trust for buying buy land near Dharamsala.

He said Bharadwaj had told the police that the bank manager had issued an 'authorisation letter' that the money was meant for some land deal.

The police arrested two persons -- Ashutosh and Sanjay Dutt -- on January 26 after the alleged recovery of Rs 1 crore. They later nabbed Shakti Lama, a key functionary of the Karmapa backed trust, who was remanded in police custody for nine days.

The residence and office of monastery functionary Gompu Tshering were raided on Saturday and foreign currency in US dollars worth Rs 4 lakh was recovered. The sleuths of Intelligence Bureau, Enforcement Directorate and Income Tax Department have also joined the probe.

"The police have so far not reached any conclusion about the source of the money and all documents including the computer of Karmapa are being thoroughly scanned," Thakur said, adding that the police had never said anything about 'Chinese links' of the Karmapa.

Karma said, "His (Karmapa's) very escape and arrival in India exposed the Chinese misrule in Tibet and confirmed what the world believes -- that the Tibetans and Tibet were under suppression and were not happy.

"When he came to India, his immediate act was to rush to the Dalai Lama to seek his blessings and to offer his allegiance and loyalty to him and also give unquestioned support to his struggle for the Tibetan people," he said. 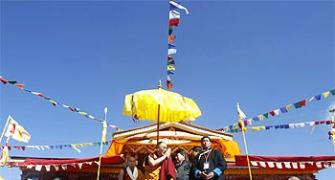 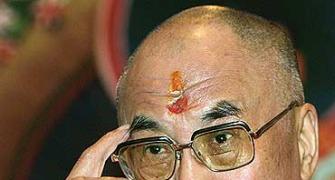