"Our concern is, Pakistan does not have a good track record as we have. The global community has to very closely look at the collaboration," Minister of State for Science and Technology and Earth Sciences Prithviraj Chavan said.

"We have expressed our concerns at the appropriate place, citing previous illegal exchanges of nuclear technology," he told mediapersons on the sidelines of silver jubilee celebrations of the Fast Breeder Test Reactor and Radiometallurgy Laboratory in Kalapakkam, Tamil Nadu.

"Right now money is not an issue to allow them operate. We are inviting domestic government owned companies as minority partners for Nuclear Power Corporation of India," he said.

Chavan said the government was also thinking of providing more autonomy to the Atomic Energy Regulatory Board. "There is an internal debate as to the shape of additional autonomy that AERB should be given."

He also said India is interested in buying uranium mines overseas to overcome shortage of the yellow metal.

"We are looking at African countries to buy uranium mines, adopting the ONGC model," the minister said. ONGC has set up a separate subsidiary, ONGC Videsh, to acquire oilfields abroad.

He said the government was in the process of drafting rules for the recently passed Civil Liability for Nuclear Damage Bill.

On the US reservations about the bill, he said they had voiced concern about right to recourse, but it has been adequately explained to them.

Source: PTI© Copyright 2020 PTI. All rights reserved. Republication or redistribution of PTI content, including by framing or similar means, is expressly prohibited without the prior written consent.
Related News: ONGC Videsh, Atomic Energy Regulatory Board, Nuclear Power Corporation of India, State for Science and Technology and Earth Sciences, Civil Liability for Nuclear Damage Bill
SHARE THIS STORY
Print this article 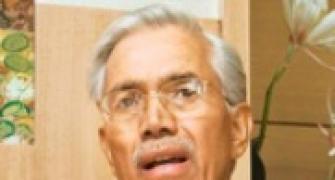 Nuclear Liability Bill: PM's Gift to the US