India, China to set up hotline for PMs

In a significant step in taking their bilateral relations to a new level, India and China on Wednesday signed an agreement to establish a hotline between Prime Ministers of the two countries.

The agreement was signed by External Affairs Minister S M Krishna and his Chinese counterpart Yang Jiechi after their first round of talks here.

This is the first time in recent years that India has established a dedicated hotline facility with any country.

Under the agreement, dedicated phone lines will be set up in the Prime Minister's office of the two countries.

This would enable Prime Minister Manmohan Singh and his Chinese counterpart Wen Jiabao to hold direct conversations whenever they want.

The decision to establish the hotline was reached during a meeting between Singh and Chinese President Hu Jintao in the Russian city of Yekaterinburg in June last year.

After the over an hour-long meeting, Krishna said the establishment of hotline facility showed how close India and China were with each other.

"This has been one of the highlights of my visit and it is fitting that the two countries were able to do it during the celebrations of 60th year of establishment of diplomatic relations," he told reporters.

Asked whether the issue of stapled visas were taken up during the meeting with Yang, Krishna said: "All issues concerning bilateral ties were discussed."

The minister said the discussions between him and Yang were "purposeful and indeed satisfying."

"We want to have continued, sustained and cordial relations with China. That has been one of the priorities of India's foreign policy. That purpose has been served by my visit to Beijing," he said.

"We want to have cordial and friendly ties and lift the bilateral relations to a new level of strategic cooperation and partnership." 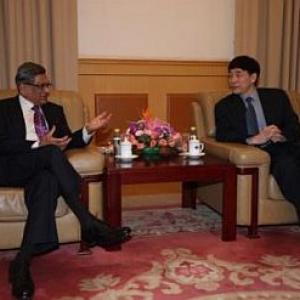 We must keep pushing the pace of our relationship, Krishna tells China

China should back India's bid for UNSC seat: Krishna