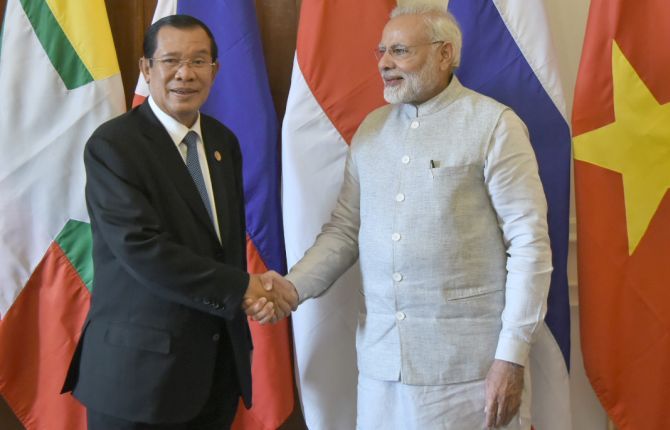 Prime Minister Narendra Modi and his Cambodian counterpart Samdech Hun Sen on Saturday held talks to boost ties in key areas of defence, security and counter-terrorism as they called for concerted global efforts to eliminate terrorism, including blocking sources of terrorism financing and dismantling terrorist bases.

After the talks between their prime ministers, the two countries also inked four pacts, including the one to improve cooperation in the prevention and investigation of crimes and legal assistance in criminal matters, besides a line of credit from India to finance Cambodia's Stung Sva Hab water resources development project for $36.92 million (Rs 240 crore).

Expressing satisfaction at the current state of bilateral defence ties, including ship visits and training programmes, the two leaders agreed to further enhance the ties, including through exchanges of senior level defence personnel and capacity building projects.

Both sides expressed a keen interest in enhancing cooperation in maritime domain, including preservation of marine and coastal environment, anti-piracy cooperation, security of sea lanes of communication to maintain peace and ensure safety and security of navigation in the Indo-Pacific Region, and supported complete freedom of navigation and overflight and pacific resolution of maritime issues based on international law.

Addressing a joint press event with the visiting dignitary, Modi said India has also proposed line of credit in several key areas such as health, connectivity and digital connectivity.

Describing terrorism as a 'curse' on humankind which poses a 'grave threat' to global peace, security and stability, the leaders unequivocally condemned terrorism in all its forms and manifestations, underscored that there was no justification whatsoever for acts of terrorism, and recognised that terrorism cannot be and should not be associated with any religion, nationality, civilisation or ethnic groups, according to a joint statement.

WATCH: India is committed to its bilateral relations with Cambodia, says PM

Reaffirming their solidarity and resolve to fight terrorism, the two leaders affirmed that those responsible for committing, abetting, organising and supporting terrorist acts must be held accountable and be punished.

They called for joint and concerted global efforts to eliminate terrorism in all its forms and manifestations in accordance with the principles of international law.

"They called upon all nations to adopt a comprehensive approach in combating terrorism, which should include countering radicalisation, recruitment, movement of terrorists including foreign terrorist fighters; blocking sources of financing terrorism including through organised crimes, money-laundering, supply of weapons of mass destruction, drug trafficking and other criminal activities; dismantling terrorist bases, and countering misuse of the Internet including social media and information and communication technologies by terrorist entities," it said.

The two sides also emphasised the central and vital role of the UN in fighting terrorism and recognised that the UN Global Counter-Terrorism Strategy is a unique global instrument that will enhance national, regional and international efforts to counter terrorism, while calling for swift and effective implementation of relevant UNSC resolutions to combat terrorism worldwide.

"In this connection, they also agreed to work together and with the international community in building a new global resolve and strategy for combating terrorism, in preventing financing of terrorist networks and terrorist acts and denying terrorists safe haven and called for an early adoption of the Comprehensive Convention on International Terrorism (CCIT)," the statement said.

The two leaders also emphasised the responsibility of all states to prevent financing of terrorist networks and terrorist acts from their territories, and safe havens and agreed that terrorism cannot be used as an instrument of state policy for furthering narrow political objectives, in an apparent reference to Pakistan.

The joint statement, however, did not name Pakistan.

On economic front, the two leaders agreed on an early signing of a bilateral investment treaty between the two countries.

They noted with satisfaction the progress in regional connectivity efforts such as the India-Myanmar-Thailand Trilateral Highway and agreed to explore the possibility of extending the highway further to Cambodia and beyond.

The statement said both leaders agreed to have scheduled services operated by designated airlines of respective countries in the near future and supported the expansion of the air traffic rights and civil aviation arrangements to facilitate the people-to-people contacts and promote tourism between the two countries.

Source: PTI© Copyright 2021 PTI. All rights reserved. Republication or redistribution of PTI content, including by framing or similar means, is expressly prohibited without the prior written consent.
Related News: Press Information Bureau of India, Narendra Modi, Ministry of External Affairs, Samdech Hun Sen, Cambodia
SHARE THIS STORY
Print this article
Why India is the pivotal nation of Asia 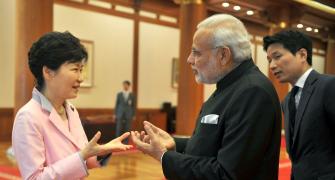 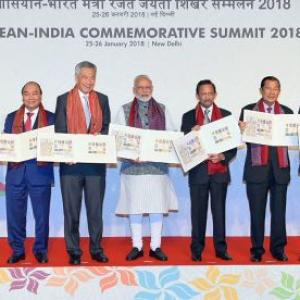 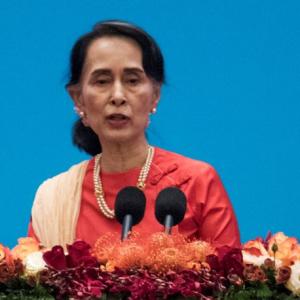