Bharatiya Janata Party ally Shiromani Akali Dal urged the Centre on Saturday to include Muslims in the new citizenship law by bringing an amendment to it, and said there should not be any exclusion on the basis of religion. 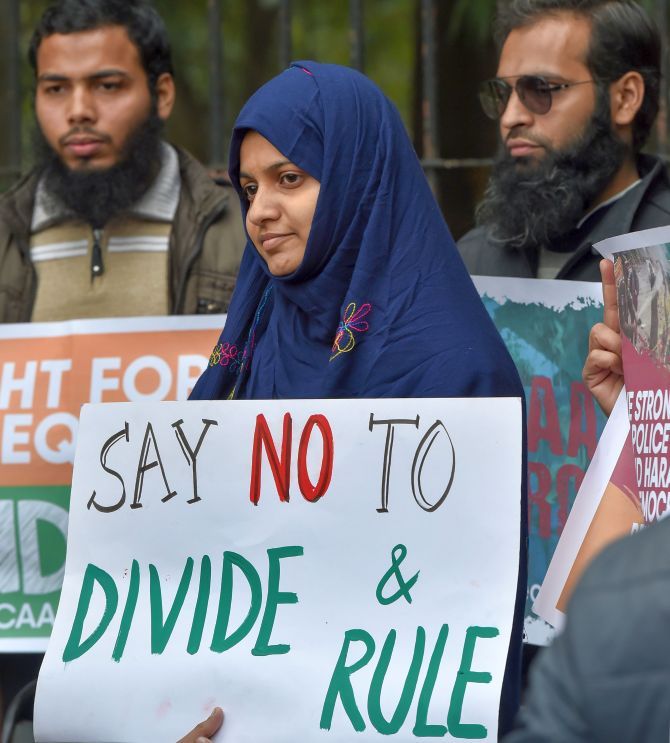 The contentious Citizenship (Amendment) Act seeks to grant Indian citizenship to refugees belonging to Hindu, Christian, Sikh, Buddhist and Parsi communities facing persecution on the basis of religion in Pakistan, Afghanistan and Bangladesh, and who entered India on or before December 31, 2014.

Replying to questions posed by reporters in Patiala, SAD president Sukhbir Singh Badal said, "We strongly feel that the Muslim community should be included in it (amended Citizenship Act)."

"I am speaking on behalf of my party and the party is very clear that the Government of India should include them (Muslims) and should come out with an amendment because that what the people feel and is the mood of the nation," he said.

The SAD chief, who is also the MP from Punjab's Ferozepur, said his party lawmakers had stated in Parliament about inclusion of Muslims in the Citizenship (Amendment) Act.

"People belonging to all religions reside in our country and this is our strength that they stay together as a team. Why should you exclude (them)?... I personally feel that the Government of India should include them. There should be no exclusion on the basis of religion," Badal said.

"I had said in Parliament that our (Sikh) Gurus sacrificed their lives for people of other faiths and our religion teaches us 'Sarbat da bhala' (welfare of all). We humbly request them to include them (Muslims in new citizenship law)," he said.

Asked whether his party would meet the Centre on this issue, Badal said he had already requested the government in Parliament and after that as well.

"Now it is up to them," the SAD chief said, adding his party has only two members in the Lok Sabha.

From the time the Citizenship (Amendment) Bill received presidential assent and became an Act, there have been violent protests in several parts of the country opposing it.

Asked whether his party was in support of the National Register of Citizens, SAD chief said he could not say anything on this issue at this moment.

"I cannot say anything at this moment because what is NRC nobody knows. Let the details come. But anybody who stayed in this country you cannot throw him out. I am very clear… you cannot say this community has to go, this religion has to go," Badal said.