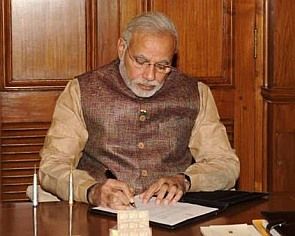 They have all had links with Gujarat during the 13 years when Narendra Modi was the state's chief minister.

And today, two-and-a-half months after Modi took charge as the country's prime minister, these Gujarat men (and women) -- at least a dozen -- are handling key assignments in various important central positions, such as those in the Prime Minister's Office, National Human Rights Commission and as secretaries to the government of India.

In the PMO, there are six officials who are either serving or retired Indian Administrative Service officers from the Gujarat cadre, or were closely associated with Modi when he was the state's chief minister.

Top on the list is P K Mishra, considered one of the most significant decision-makers in the PMO. He is additional principal secretary to Modi and reports directly to the PM.

Sources say Mishra, who has Modi's ears like none other in the PMO, deals with critical files related to bureaucrats' placements, among other things.

Mishra hardly gets time off from meetings, which spill over to late evenings at his South Block office. The retired 1972-batch Gujarat-cadre IAS officer was principal secretary to Modi in the chief minister's office between 2001 and 2004.

There are others with stints at Gujarat State Disaster Management Authority, a body headed by the chief minister, who have been picked by Modi for PMO.

His private secretary, Rajeev Topno, for example, is a 1996-batch Gujarat-cadre IAS officer. Topno was joint CEO at GSDMA when Modi was CM. Topno is one of the two private secretaries to the PM - the other one is Indian Foreign Service officer Sanjeev Kumar Singla.

Arvind Kumar Sharma, a 1988-batch Gujarat-cadre IAS officer and now a joint secretary in PMO, is seen by industry captains as the go-to man.

Business and infrastructure are his forte and company honchos, according to another source, are more comfortable dealing with him than some of the ministers at the Centre. Sharma was one of those associated with two of Modi's biggest achievements -- Vibrant Gujarat and getting the Tata Nano plant relocated to Sanand.

Sanjay Bhavsar, Hiren Joshi and Jagdish Thakkar are among those in Modi's PMO who had been at the chief minister's office in Gujarat for some years. Though their specific designations, except Thakkar's, have not been made public, they are very much part of PMO.

Bhavsar, who was officer on special duty in the chief minister's office

and looked at Modi's appointments, is a key aide to the PM.

Joshi, another OSD at Modi's CMO, used to manage the chief minister's portal and social media initiatives. He now is believed to be closely working with the PM on the social media, a medium Modi has chosen for most of his government's interactions.

Thakkar, it is learnt, continues to work on press statements at PMO, including their translation into Gujarati. Though Thakkar is a press relations officer, he is known for not speaking to the media.

Then there is Bharat Lal, Gujarat resident commissioner in New Delhi. The buzz was that Lal was going to be appointed joint secretary in PMO. That has not happened so far but this Indian Forest Service officer shuttled between PMO and Gujarat Bhavan in the initial weeks after Modi took charge as PM. Though back to Gujarat Bhavan for now, he is believed to be in the thick of things in running of the government.

Another Gujarat-cadre appointment was of Rajesh Kishore, who was named secretary-general at the NHRC, which had been critical of the inadequate response from Gujarat's Modi government after the 2002 riots. Kishore, a 1980-batch IAS officer, earlier was CEO of GSDMA from 2005 to 2009, a period when Modi was CM.

In another recent appointment, Tushar Mehta, additional advocate general of Gujarat, was made assistant solicitor general of India.

Among bureaucrats, Hara Krushna Das, a 1980-batch Gujarat-cadre IAS officer, was in July appointed secretary in the inter-state council secretariat under the home ministry. Das was additional chief secretary in the Gujarat government's environment & forest department during Modi's tenure as CM. There are four Gujarat-cadre secretaries at the Centre now.

Gauri Kumar, who worked closely with Modi in earlier years, was already a secretary in the central government when Modi took charge as PM.

The 1979-batch Gujarat-cadre IAS officer is being seen as the force behind several labour law reforms announced in the past two months -- the Cabinet has cleared three labour law amendments and the central government has already tabled those in Parliament.

In Modi's Gujarat, Kumar had served as industries commissioner and principal secretary in the industries and urban development departments between 2007 and 2010. She helped the state bag some prestigious industrial projects. One of her landmark achievements, according to sources, was swiftly convincing Tata Motors to shift its controversial Nano car project to Gujarat.

They say Modi had tasked a team of trusted officials, including Kumar, to bring Nano plant to Gujarat. And, a deal was struck within four days of the company leaving West Bengal's Singur; the memorandum of understanding for this was signed by Kumar herself.
Nivedita Mookerji & Somesh Jha in New Delhi
Source: