Tribals living in the hills around Sabarimala alleged that the government and the Travancore Devaswom Board were trying to demolish centuries-old customs by allowing entry of women in the 10-50 age groups into the famous Sabarimala temple. 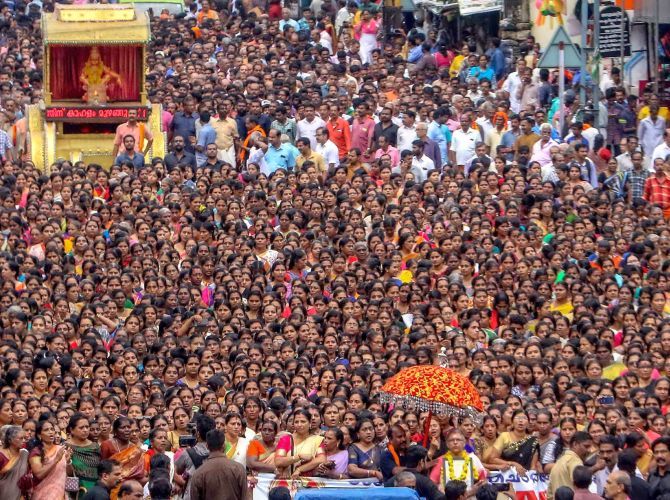 IMAGE: Hundreds of devotees take part in the namajapa (chanting the name of Lord Ayyappa ) during march in Kottayam against the Supreme Court verdict on the entry of women of all ages into the Sabarimala Lord Ayyappa Temple. Photograph: PTI Photo

They claimed that restrictions imposed on women in the menstruating age group were part of a custom prevailing in tribal societies living in the forests in Kerala.

They also claimed several rights of the tribal communities over the Sabarimala temple and the places associated with the hill shrine were forcibly taken away from them by the authorities of the government and the Travancore Devaswom Board that manages the temple.

"The Devaswom Board has even taken control of tribal Gods and devasthanams in various hills around Sabarimala," said 70-year-old V K Narayanan, chief of the forest-dwellers in the Attathodu area.

He alleged the authorities were trying to demolish centuries-old tribal custom associated with the temple.

"Look at our skin. We are tribals. Our custom is being demolished by those institutions which are duty-bound to protect them," he said.

The tribal chief, who is called as Mooppen, said considering menstruating women impure is a Dravidian custom and is associated with the worship of nature by the tribal people.

"Lord Ayyappa is our God. Restrictions imposed on women of a certain age group from entering the shrine is part of our custom. Following the custom is very important for worshipping at the Lord Ayyappa temple situated in the dense forests. It should not be violated. Impure women should not be allowed in the Sabarimala temple," said Narayanan, participating in the Sabarimala Achara Samrakshana Samiti's agitation.

He claimed access for general public to the Sabarimala temple started only in the beginning of the 20th century and earlier only royals and priests used to trek once in a year during Mandala-Makaravilakku season to the hills for performing poojas.

"Lighting of lamps in the temple used to be done by our forefathers because no others dared to enter the shrine in the deep forests more than a century ago. Our people survived in this forest which had wild animals including tigers and leopards as we are protected by Lord Ayyappa," he said.

"We will not let any impure woman enter into poonkavanam -- sacred forests of Lord Ayyappa," 58-year old tribal woman Omana said Tuesday evening as she checked
pilgrims' vehicles heading to Pamba to ensure that no woman in the age group of 10 and 50 years was travelling in them to enter the Sabarimala temple.

Like Omana, dozens of tribal and Dalit women and children living in the hills around Sabarimala had assembled at Nilackal, keeping vigil at the main gateway to Sabarimala, and other pockets on the way to the hill shrine to ensure that not a single woman in the age group of 10 and 50 years goes to the temple violating the age-old custom associated with it.

Police on Wednesday removed protesters increasing its presence in Nilackal base camp, 20 kilometres from Sabarimala, following incidents of the vehicle checks by devotees, preventing women belonging to the "banned age group" from trekking the holy hills.

The tribals and Dalits believe that if the women in this particular age-group climbed the hill violating the custom would bring a bad omen for them.

"This is the holy land of Lord Ayyappa. He is our prince. No one should be allowed to disturb our Lord who protects us from all evil forces," Karthyayani, 54, belonging to the Kurava community, a scheduled caste, said.

"I appeal to all including politicians... kindly don't disturb peace of our Lord and forests in the name of the Supreme Court judgement," Omana, who belongs to the Ullada tribal community, said.

The tribals feel that some vested interests were utilising the Supreme Court verdict on Sabarimala to play politics over the issue.

"We live a few miles away from the temple. Our women in this age group have never attempted to go to the temple," she said.

The women said they could not agree with the top court verdict permitting women of all age groups to enter the shrine.