Assam Chief Minister Tarun Gogoi on Sunday dismissed the suggestion that illegal migration from Bangladesh has led to high growth of Muslim population in the state but blamed illiteracy for the high birth rate among the community.

He said the growth of Muslim population in Assam was higher than Hindus as the community give birth more children due to poor rate of literacy among themselves.

"It is because of low literacy...Illiteracy among the Muslims. Most of them are illiterate. Every family...six, seven, eight, nine, ten...It is because of illiteracy," he told Karan Thapar in Devil's Advocate programme on CNN-IBN.

When repeatedly asked whether he was suggesting that illiterate people have more children, Gogoi said, "Yes, 100 per cent I believe...It is because of illiteracy.

Gogoi said even though there were around three lakh cases pending against suspected illegal immigrants in various tribunals, many would be dismissed eventually as it is very difficult to prove the allegations.

The three-time chief minister also 'challenged' the claim of Bodoland Territorial Council chief Hagrama Mohilary that there were two lakh illegal immigrants in the in BTC area saying the figure was wrong.

Asked whether he was soft towards the Bodos during the recent clashes as the Bodoland People's Front is a coalition partner of his government, Gogoi termed it as a wrong perception saying even the Bodos were accusing him of being soft towards Muslims.

"It is absolutely wrong. It is a false propaganda. I don't depend on them. I have 78 members of Legislative Assembly (Congress) out of 126. They (BPF) are part of the government but I don't need their support (for the survival of the government). (If I needed) why did I arrest the Bodo MLA," he said.

Admitting his '100 per cent responsibility' for the recent violence which claimed more than 80 lives, Gogoi said it was due to 'procedural' reasons as there was delay in deployment of army in troubled areas to control the situation.

"It is a change of procedure that has delayed the whole process. Even the defence minister himself has admitted it," he said.

According to Gogoi, since there was much improvement in the situation of Assam till June, the Central government took back many paramilitary personnel from the state to be deployed in other disturbed areas.

"As the head of the state, definitely I am responsible," he said. 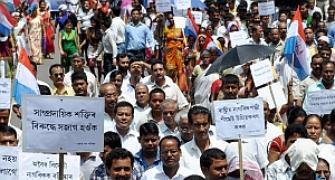 Oppn AGP brings out rally in Guwahati against violence