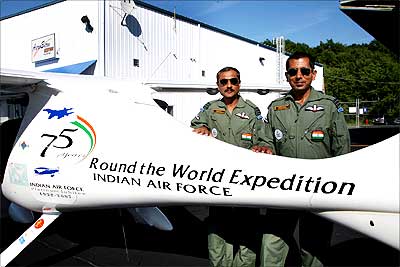 Indian Air Force pilots Wing Commanders Rahul Monga and Anil Kumar have been on a special mission for the last 53 days.

The two pilots, who lead the IAF's Round The World Expedition, are circling the globe in an ultralight aircraft, passing through 80 cities/towns, 18 countries and traversing some 41,000 kilometres.

Wing Commanders Monga and Kumar hit the blue skies at 8 am on June 1 at Hindon, near New Delhi, in their tiny 279-kg aircraft, and travelled across Uttar Pradesh to Bagdogra, West Bengal, down to Myanmar and then on to Bangkok, Vietnam, China and up the eastern flank of Russia.

The China leg was hampered by some annoying typhoons. Low visibility dogged their journey through Russia, putting the expedition a few days behind schedule.

On July 6 Wing Commander Monga crossed the Bering Sea into Alaska and reached Nome, solo; the first Indian to do so.

Wing Commander Kumar took a break in the trip during the Russian leg, when he abandoned his co-pilot seat to a Russian-speaking navigator and re-joined his IAF colleague in Nome on a commercial airliner.

Tsunami orphans on a high

From Nome the duo flew down the western coast of Canada and into mainland US. They criss-crossed America flying from Salem, Oregon to Colorado Springs, Colorado, Santa Paula, Arizona and to Memphis, Tennessee.

In the photograph, the two pilots take a break at an airfield in Providence, Rhode Island, as their US journey comes to a close. The wee plane has a wing span of just 8.5 metres.

Monga and a microlight (he earlier flew) were pressed into service in March 2005, post the 2004 tsunami, when he immensely cheered the spirits of 27 tsunami orphans with 27 memorable rides above Kanyakumari.

Round the World itinerary

From Providence, Monga and Kumar head out to Toronto, up to Greenland and then across the Atlantic. On their return journey they will fly across Iceland, Denmark, the UK, Germany, Switzerland, Italy, Greece, Turkey, Iran, UAE and touch down at Jamnagar sometime in early August.

The scheduled day of their return home was August 4, but bad weather on earlier segments has probably pushed that date ahead, unless the two pilots can make up time by forgoing a few rest days.