By A Correspondent
December 26, 2010 14:40 IST
The Strategic Forces Command responsible for the nuclear arsenal of the country will be headed by Air Marshal KJ Mathews, who will take over from Lieutenant General Balraj Singh.

SFC, an agency tasked with the use of the nuclear weapons, was set up in 2003 along with an eight-point nuclear doctrine committed not to first strike first or use nukes against the non-nuclear nations.

An Indian Air Force commander will head the SFC after a gap of two years. Currently, Mathews is the air officer in-charge of the IAF.

Headed by Prime Minister, the SFC was formed during the National Democratic alliance regime. Nuclear weapons can be activated only on specific orders of the PM and no other authority. 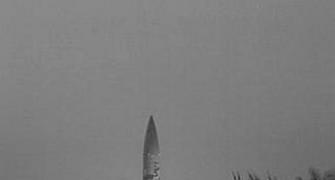