I don't want to be Bihar CM again: Lalu

After announcing an agitation against the Nitish Kumar-led Bihar government, Rashtriya Janata Dal chief Lalu Prasad on Monday declared that he did not want to become the chief minister of Bihar again.

At a press conference in Patna, he claimed that he didn't want to be the CM and his party will decide the chief ministerial candidate when it comes to power.

"Main us sarkar ka pramukh rahunga (I will be the chief leader of the party)," he said.

Lalu pointed out that he had served as the chief minister twice as well as the Union railway minister.

Lalu declared that his party will launch an agitation against Nitish Kumar's government from the district to the block level.

"Nitish Kumar has betrayed the people of Bihar by promising them everything, but in reality there is an acute shortage of electricity and water during summer. Law and order has completely collapsed," Lalu said.

Lalu also claimed that criminals are ruling the roost in Bihar.

"There is no law and order as reports of murder, kidnapping, loot, and dacoity are pouring in from different parts of the state daily," he said.

He accused the Nitish Kumar government of failing on all fronts.

"There is rampant corruption in the MNREGA, the prime minister's Rural Road Scheme to the Minimum Support Price for procurement of wheat from farmers," he said.

As his party is the main opposition in Bihar, said Lalu, it is the responsibility of his party to invite other Opposition parties like the Congress, the Left Front and the Lok Janshakti Party to join the agitation against the Janata Dal - United government. 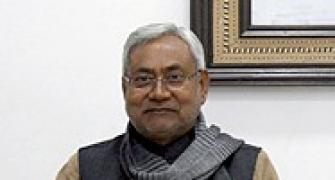 Why BJP has not emerged as national alternative to Cong
15 lakh 'fake' students enrolled in Bihar schools!