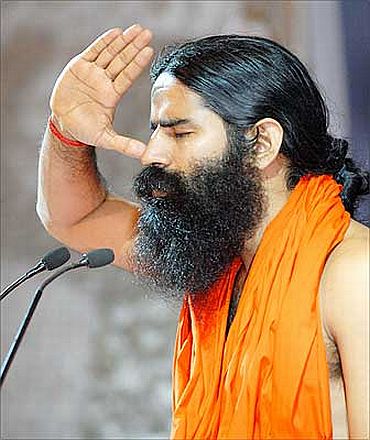 The Congress lawmaker from Arunachal Pradesh, who has been accused of calling yoga guru Baba Ramdev a "bloody Indian" and a "dog", has offered to resign from Parliament if the charges are proved to be true.

Ninong Ering told ANI in an exclusive interview on Tuesday that he had only told Baba Ramdev not to use a socio-religious platform to preach politics, which resulted in a heated confrontation between the two.

Ering strongly denied that he had used profanities like 'bloody Indian' and 'dog' against Baba Ramdev.

The lawmaker, who belongs to a political family and has an experience of 25 years in public life, said the confrontation with Baba Ramdev took place at Pasighat in Arunachal Pradesh on February 19 during a yoga camp.

"I have told and written in my letter to the Congress party that if it is proved that I have said 'bloody Indian' or 'dog' to Baba Ramdev, then I will resign on the same day," Ering told ANI when asked what was his explanation to Congress general secretary in-charge for Arunachal Pradesh, V Narayansamy.

The Congress MP said that he felt hurt over an incident that has been blown out of proportion, and added it has caused huge embarrassment to the people of the country for all the wrong reasons that came out in media.

Ering claimed that even his parliament colleagues in the opposition Bharatiya Janata Party would vouch for him that he would not use such foul language against the Baba.

"I am a true Indian and the only MP from North East region who always speaks in Hindi in Parliament. And, whenever I travel inside the country, I make it a point to speak to people in our national language," he said.

He further added that whenever he travels out of the country, he makes it a point to clarify that the people of Arunachal Pradesh are true Indians and that the Chinese are just making nuisance of themselves by creating unnecessary controversy over the border issue.

Following and practicing Baba Ramdev's yoga for the last four years, Ering said that wanted the Baba not to use his yoga classes to target politicians.

He further said that during the camp in Pasighat, the Baba had questioned giving Bharat Ratna, highest civilian honour in India, to late premier Rajiv Gandhi and demanded the honour for himself.

This enraged Ering as Ramdev was trying to make fun of his idol and leader.

Ering, who has apologised to Ramdev for disrupting his camp, remains firm that such platforms shouldn't be used for politicking.

The lawmaker also found support from his senior colleague Digvijay Singh, who said that the yoga guru should prove that the money he used to develop his assets are tax-paid and not black money.

Singh added: "We appreciate guru Ramdev for supporting the cause of bringing black money back. But he should also clear and should be able to prove that whatever he used in making his assets or in the construction of his ashram (hermitage) should be tax-paid and not black money."

Of late, Ramdev has been running a campaign for bringing black money back, which has been stashed in Swiss banks.