Looking forward to a wide range of programmes, including addressing a record 50,000 Indian Americans, Prime Minister Narendra Modi arrived in the energy capital of the world on Saturday with "Howdy", the traditional Texan way of greetings. 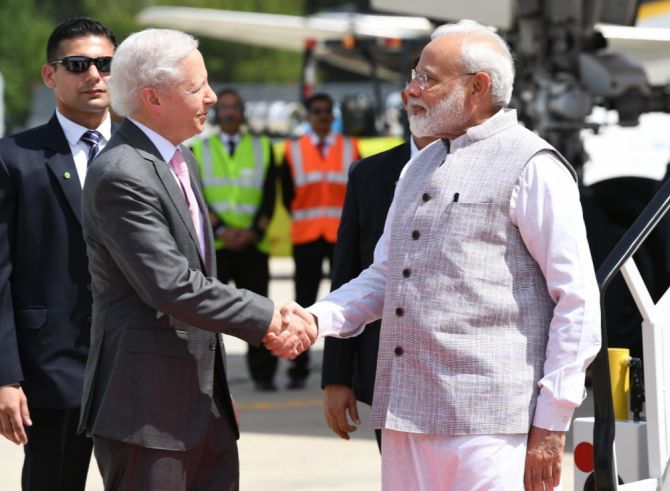 "Howdy Houston", he tweeted soon after landing in Houston in the afternoon. "It's a bright afternoon here in Houston," he added.

"Looking forward to a wide range of programmes in this dynamic and energetic city today and tomorrow," the prime minister tweeted.

India's energy independence is one of the major goals that Modi has set for himself.

The prime minister was received at the airport by India's Ambassador to the US, Harsh Vardhan Shringla, and his American counterpart Ken Juster.

Both at the airport and at the hotel entrance, Modi was greeted by groups of Indian Americans with flags of India and the United States.

On Sunday morning local time, Modi will be addressing the mega "Howdy Modi! Shared Dreams, Bright Future" event at the NRG Stadium. In a special gesture, US President Donald Trump and other officials will also be present during the event.

From Houston, Modi will fly to New York, where a packed schedule awaits him. On Tuesday, he is scheduled to meet President Trump on the sidelines of the UN General Assembly.

Soon after his arrival in Houston, #HowdyModi started trending on social media.

Congresswoman Tulsi Gabbard, who is also a Democratic presidential aspirant, greeted the prime minister on Twitter.

"Indian PM Narendra Modi has just arrived in Houston. And we cannot wait to say hello. Are you ready Houston?" she said on the microblogging website.

"We are already here to welcome our Beloved PM," said Rikin Talati.

Prime Minister Narendra Modi was accorded a warm welcome by members of the Indian community as he arrived at the "dynamic and energetic city" of Houston for the mega "Howdy Modi" event in which he will be joined by US President Donald Trump and address over 50,000 Indian-Americans.

The "Howdy Modi" event on Sunday at the sprawling NRG Football Stadium in Houston is the largest gathering ever for an elected foreign leader visiting the US, other than the Pope.

The prime minister was received by US Ambassador to India Kenneth Juster, Indian Ambassador to the US Harsh Vardhan Shringla and other senior officials.

US President Trump's presence at the Houston event marks a new milestone, Modi had said in his departure statement ahead of his visit.

This would be the first time a US president is attending an Indian-American community event with Modi.

Welcoming Trump "special gesture", the prime minister had said that it signifies the special friendship between India and USA and highlights the strength of the relationship and recognition of the contribution of the Indian community to American society and economy.

The two leaders are likely to discuss a range of bilateral, regional and global issues, including efforts to address the growing bilateral trade disputes, potential defence and energy deals and peace process in Afghanistan.

In his departure statement, Modi referred to the Indo-US relations and said working together, the two nations can contribute to building a more peaceful, stable, secure, sustainable and prosperous world.

Modi also said that at the High Level Segment of the 74th Session of the United Nations General Assembly, he would reiterate New Delhi's commitment to reformed multilateralism, which is responsive, effective and inclusive, and in which India plays her due role.

Foreign Secretary Vijay Gokhale in New Delhi on Thursday said the focus of Prime Minister Modi's week-long visit to the US to attend the UNGA will not be on terrorism, but on highlighting India's achievements and its global role.

He also asserted that abrogation of provisions of Article 370 from Jammu and Kashmir was an internal issue and off the agenda at the UN.

Meanwhile, representatives of Sindhi, Baloch and Pashto groups have gathered in Houston to hold a demonstration in front of the NRG stadium on Sunday to draw the attention of Prime Minister Narendra Modi and US President Donald Trump for gaining freedom from Pakistan.

Scores of members of the Balochi American, Sindhi American and Pashto American communities landed in Houston on Saturday from various parts of the US to hold the first-of-its-kind demonstration in America, wherein they will collectively urge the leaders of India and the United States to help them get freedom from Pakistan.

Members of these groups alleged on Saturday that the Pakistani establishment was carrying out gross violation of human rights against their communities.

"We demand freedom from Pakistan. India and the US should help us in the same way as India had helped the people of Bangladesh in 1971," Nabi Baksha Baloch, the US representative of the Baloch National Movement, told PTI.

"We are here to request Prime Minister Modi and President Trump to support our cause. There has been gross violation of human rights against the Baloch people by the Pakistani government," he said.

More than 100 Sindhi Americans arrived in Houston on Saturday. They are planning to gather outside the NRG stadium, where the "Howdy Modi" event is scheduled to be held on Sunday, with the hope that their posters and banners of freedom will catch the attention of Modi and Trump.

"This is a historic rally by the leaders of the free world -- the largest and oldest democracies. We the people of Sindh want freedom from Pakistan. Just like India supported for the freedom of Bangladesh in 1971, we want a separate nation for the people of Sindh. Pakistan is a theocratic country," Zafar Sahito, from the Jeay Sindh Mutahida Muhaz, said. 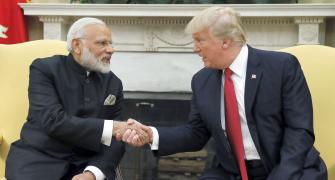 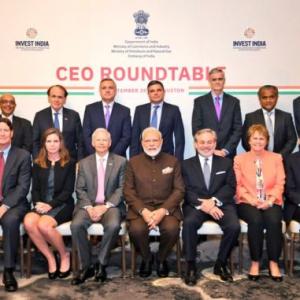