Parliament work washed out for 5th day over demonetisation

For the fifth consecutive working day, proceedings in Parliament were washed out on Wednesday as opposition parties continuously created ruckus, persisting with the demand for presence of Prime Minister Narendra Modi and debate on demonetisation under a rule that entails voting.

Both the Lok Sabha and the Rajya Sabha failed to transact any business and were adjourned prematurely due to the uproar. IMAGE: A gardener water plants outside Parliament as the opposition parties kept up its attack on the government. Photograph: PTI Photo

In the Lok Sabha, parties like Congress, Trinamool and the Communist Party of India-Marxist pressed for an Adjournment Motion and debate under a rule that entails voting.

This was rejected by Speaker Sumitra Mahajan, who maintained that discussion can take place under some other rule as well.

Modi was present in the House briefly during Question Hour, during which only one question could be taken up amid the opposition’s din which led to the first adjournment.

Shiv Sena, which had participated in Trinamool Congress-led march against demonetisation last week, saved embarrassment to the government as it changed its stand and praised the step besides supporting Bharatiya Janata Party stand that the debate be held under Rule 193, which does not entail voting.

However, since there was no unanimity on the mode of having a debate, members of Congress and Trinamool again trooped into the Well, shouting slogans and forcing adjournment first till noon and later for the day. 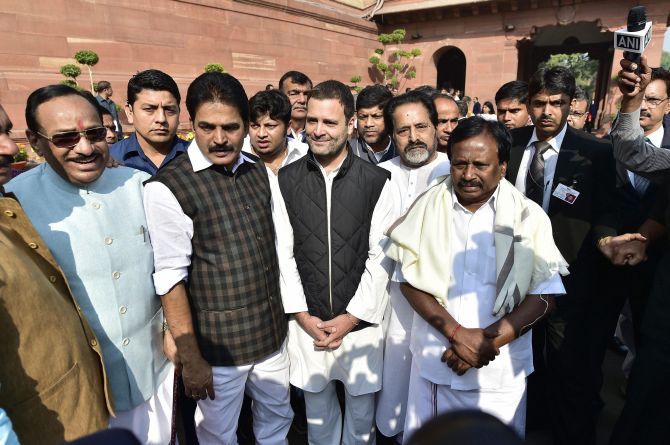 Earlier, Leader of Congress Mallikarjun Kharge said his party was ready for a discussion but under Rule 56, which entails voting.

“A message has gone out that the opposition is not ready for discussion. People are distressed, people are at pain and we want to discuss their problems. What we want is that the prime minister should be present here. You (Speaker) should allow us the adjournment motion,” he said.

Parliamentary Affairs Minister Ananth Kumar said the government is willing to discuss the issue any time and it may not be a short duration debate but could “go on for 1-2-3 days.”

“If the opposition offers any constructive suggestion, we will heed to it, implement it. We have launched a campaign against black money, fake currency and corruption and people of India are supporting Modi,” Kumar said.

Mahtab of BJD and Jithender Reddy of Telangana Rashtra Samithi, two parties which have not joined the Congress-led protests, favoured a quick resolution to the impasse so that Parliament can resume its proceedings and take up matters of public interests. BJD demanded a discussion under Rule 193.

Batting for discussion under a Rule involving voting, Sudip Bandhopadhyay of the Trinamool Congress wondered what was the harm in it as the government enjoys a “brute majority” in the Lok Sabha and will win in the eventuality of division of votes.

Noting that over 300 opposition members from both the Houses had joined a protest in the Parliament Complex on Wednesday morning, he urged Speaker Sumitra Mahajan to sit with the government and thrash out a solution.

Jaiprakash Narayan Yadav of the Rashtriya Janata Dal said the country was passing through a crisis.

Anandrao Adsul of the Sena said his party has welcomed demonetisation as it was necessary to phase out old currency notes to remove fake currency, black money which were supporting terrorism.

Referring to the relaxation for farmers announced by the government, he said it will help them a lot.

The decision is being praised in the country as well as abroad, Prem Singh Chandumajra of the Shiromani Akali Dalsaid. IMAGE: Opposition party members storm into the Well of the Rajya Sabha demanding the presence of the prime minister. Photograph: PTI Photo

In the Rajya Sabha, opposition parties were relentless in their demand for Modi’s presence for resumption of debate from where it was left on November 16.

The uproarious scenes led to the adjournment of the proceedings first till noon, then till 1400 hours and finally for the day.

Bahujan Samaj Party leader Mayawati went to the extent of seeking an apology from Modi for speaking outside the House when Parliament is in session, while the Congress demanded a Joint Parliamentary Committee to go into the “sudden announcement” of demonetisation of 86 per cent of the currency in circulation.

While the BJP members too shouted slogans seeking resumption of discussion on the issue that started on November 16, opposition members led by Congress and TMC trooped into the Well of the House raising slogans demanding that prime minister be called to the House, forcing Deputy Chairman P J Kurien to adjourn the proceedings till 1200 hours.

Soon after obituary references and laying of the listed papers, Sharad Yadav of the JD-U said when the prime minister says the demonetisation decision was taken in national interest, why is no compensation being paid to over 75 people who died because of hardships caused by it. 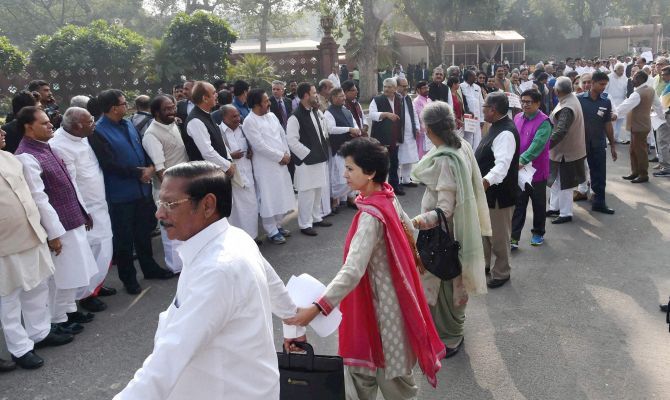 IMAGE: Opposition party members form a human chain outside the Parliament to protest against the demonetisation move. Photograph: PTI Photo

Naresh Agarwal of the Samajwadi Party said if the PM does not have the time to come to the House, arrangements should be made for an online interface, an oblique reference to Modi using video conferencing to address events held in far-off places.

Mayawati of the BSP sought the Chair’s protection in getting the PM to speak on the issue inside the House and not outside when the Parliament is in session.

By speaking outside, he has “insulted” the House and breached its privilege, she alleged and added: “Prime Minister should be called to the House... he must apologise why he is speaking outside.”

Sitaram Yechury of the CPI-M said Modi was violating the Constitution by not answering questions in the institution (Parliament) he is accountable to.

Anand Sharma of the Congress said even during financial emergency, the government cannot restrict citizens from accessing their own bank accounts like the way severe restrictions have been imposed on withdrawal from own account after the November 8 decision.

“He has created financial anarchy. Prime Minister must come” and answer questions on hardships caused, he said.