Homosexuality not a disorder: Gay rights activist to SC

Source: PTI
March 15, 2012 18:42 IST
Homosexuality is not a mental and psychological disorder and it is a normal form of sexuality, gay rights activists argued before the Supreme Court on Thursday while pleading for decriminalization of gay sex. They told a bench of justices G S Singhvi and S J Mukhopadhaya that decriminalisation of homosexuality would remove the stigma on them.

"Homosexuality is a normal form of sexuality. It is simply a normal variant of sexuality. It is not a mental and psychological disorder. Many gay and lesbian people are even raising children," senior advocate Shyam Divan, appearing for one of the gay rights organisation, said.

"Science says that people develop such orientation before they become adult. It develops between middle childhood and early adulthood," he added.

He further submitted that recently the United Nations Human Rights Commissioner has placed his report before UN Assembly recommending quashing of all such legal provisions, which criminalise homosexuality.

"In our society these things are not talked about. It is a dilemma for homosexuals. One feels isolated. There is a huge psychological stigma associated with homosexuality. It comes from two streams, one from societal and the other from legal. It is an emancipation petition and the court should liberate us from the stigma," he said.

The bench the said, "It is a failure of society not to provide dignity to people irrespective of sexual orientation and way of living."

The bench also observed that the concept of morality has changed with the passage of time and noted that it has nowadays become normal for a person to be in multiple relationships, which was earlier considered immoral.

Earlier, Naz Foundation, a non-government organisation working for the welfare and rehabilitation of HIV infected persons, contended that criminalising homosexual acts is against constitutional values and law should not interfere when consenting adults are involved.

"It amounts to demeaning their worth and marginalising them in society. They are not able to reveal their sexual expression as it has been made an offence in the society. Even incest is not an offence," the NGO had said.

Senior Bharatiya Janata Party leader B P Singhal, who had opposed in the high court the plea for legalisation of gay sex, has challenged the verdict in the Supreme Court, saying such acts are illegal, immoral and against ethos of Indian culture. Religious organisations like the All India Muslim Personal Law Board, Utkal Christian Council and Apostolic Churches Alliance too have also challenged the high court's order.

The Centre had informed the apex court that there are an estimated 25 lakh gay population and about seven per cent (1.75 lakh) of them are HIV infected.

The affidavit, filed by the health ministry, said that it is planning to bring four-lakh high risk Men who have Sex with Men under its AIDS control programme and it has already covered around 2 lakh. How many gay people in India? SC asks govt 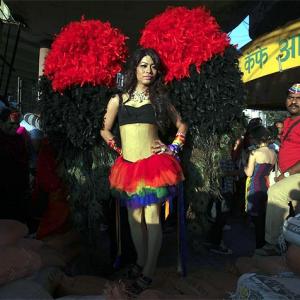