The decision to hold Bihar assembly polls amid the coronavirus pandemic is not a "misadventure" but a leap of faith and not a leap in the dark, Chief Election Commissioner Sunil Arora asserted on Friday. Responding to a volley of questions on holding elections when the pandemic has not subsided, he said, "As a commission, we don't regard it as a dussahas (misadventure) ... it is a very, very meticulously worked, from our side, exercise."

He also said the decision to hold the elections in the state, where the term of the assembly ends on November 29, is "a leap of faith and not a leap in the dark."

Arora also gave the example of recently-held JEE and NEET examinations, saying thousands of candidates from various district across India came out to write the test.

Some opposition parties had urged the EC to postpone the elections in view of the pandemic.

The CEC also cited a recent Supreme Court observation, saying eventually life has to go on.

In a related development, the apex court on Friday refused to entertain a plea seeking to postpone the upcoming Bihar assembly elections in the wake of the COVID-19 pandemic.

A three-judge bench of Justices Ashok Bhushan, R Subhash Reddy and M R Shah also refused to grant liberty to the petitioner to give representation to the Election Commission in this regard.

"We can't permit everybody to go to the Election Commission. We can only permit you to withdraw the petition," the bench said.

Asked whether the voter turnout will be effected due to the pandemic, Arora said the electors are very aware of what they want and most won't miss out on the opportunity of exercising their franchise.

Responding to a question on whether the COVID-related guidelines would be in place for future elections too, he said God has not given him wisdom of astrology. He said much would depend on the situation prevailing at that time.

The CEC said the decision to hold state elections in three phases was taken keeping in mind the COVID-related safety norms and the fatigue factor of security personnel. 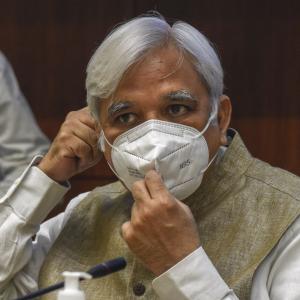