Jharkhand Mukti Morcha leader Hemant Soren, the son of Jharkhand architect Shibu Soren, took the reins of the state as chief minister on Sunday, a week after a three-party coalition, led by him, swept the assembly polls, bagging 47 seats in the 81-member assembly. 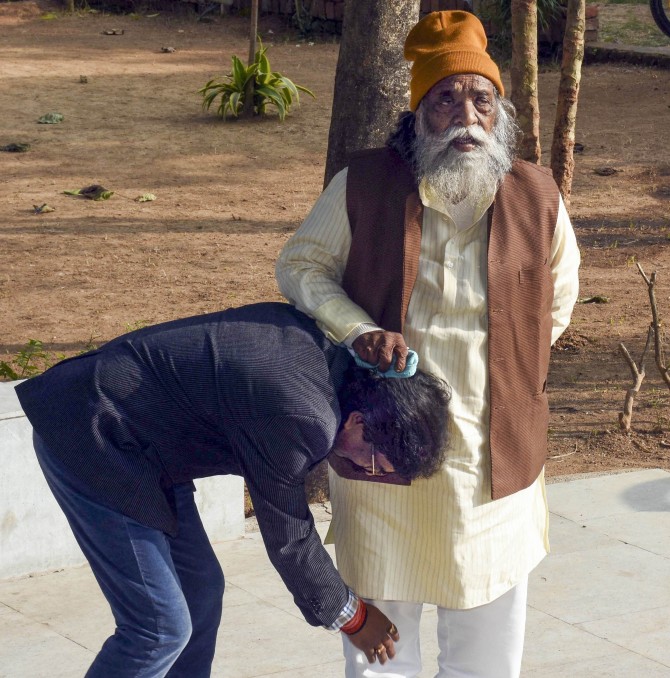 This will be Soren's second stint as the chief minister of the tribal state. His first had lasted for just about 14 months since July 15 2013.

With support from his allies -- the Congress and the Rashtriya Janata Dal -- Soren, who had been the face of the coalition, stormed to power, as his party alone won 30 Assembly seats, its highest tally ever.

Born to Shibu Soren, known as 'Guruji' to his innumerable followers, and wife Roopi on August 10, 1975 at Nemra village in Ramgarh district of Jharkhand, the newly sworn-in chief minister has been widely credited with stitching the alliance to defeat the seemingly invincible BJP.

Shibu Soren, along with his family, was present at the swearing-in ceremony on Sunday.

The senior Soren, who had served as chief minister thrice, is known to have groomed Hemant to helm the Jharkhand Mukti Morcha, after his elder son Durga Soren died of suspected kidney failure and he was convicted in the Chirrudih massacre case.

Durga was Guruji's first choice for inheriting his political legacy and mantle.

It was only after he died and 'Guruji' quit the Manmohan Singh cabinet owing to his court conviction, Hemant emerged as heir apparent of the 'Soren clan' and won the Dumka Assembly seat in 2009.

He went on to become a Rajya Sabha member in 2009-2010, before becoming Jharkhand's youngest chief minister in 2013, with the support of the Congress and the RJD.

During his political ascendency, Soren was able to sideline JMM's senior leaders Stephen Marandi, Simon Marandi and Hemlal Murmu, prompting them to quit the party.

While Murmu and Simon Marandi joined the BJP, Stephen Marandi floated a party along with the first BJP chief minister of the state, Babulal Marandi.

Stephen had later returned to the JMM fold, accepting Hemant Soren as the party's leader.

Soren's rule was, however, short-lived as the BJP seized power in 2014 in the politically unstable state and Raghubar Das took charge.

In 2014, he won a seat in the Jharkhand assembly and became the leader of the opposition.

Cornered over the last five years, with the saffron party accusing him and his family of violating the Chhotanagpur Tenancy Act and Santhal Pargana Tenancy Act, Soren took time but patiently overcame the tempest and formed the pre-poll alliance with old friends - the Congress and RJD.

He also managed to get the lion's share of 43 seats, giving 31 to Congress and seven to the RJD in the pre-poll seat pact, even as the Lalu Prasad-led party was left frowning over the adjustment.