The Delhi high court on Friday asked the Centre to reply to pleas by Facebook and WhatsApp challenging the new IT rules for social media intermediaries requiring the messaging app to ”trace” chats and make provisions to identify the first originator of information. The pleas have challenged the new rules on the grounds that they violate the right to privacy and are unconstitutional.

A bench of Chief Justice D N Patel and Justice Jyoti Singh issued notice asking the Centre, through the ministry of electronics and information technology, to file a reply on the petition as well as the application for stay on the implementation of the Rules.

The court listed the matter for further hearing on October 22.

The counsel for the Centre said the main advocate was not available and sought an adjournment which was opposed by senior advocates Harish Salve and Mukul Rohatgi, appearing for WhatsApp and Facebook respectively.

The Facebook owned company, WhatsApp, in its plea said the requirement of intermediaries enabling the identification of the first originator of information in India upon government or court order puts end-to-end encryption and its benefits "at risk".

WhatsApp LLC has urged the high court to declare Rule 4(2) of the Intermediary Rules as unconstitutional, ultra vires to the IT Act and illegal and sought that no criminal liability be imposed on it for any alleged non-compliance with Rule 4(2) which requires enabling the identification of the first originator of information.

WhatsApp said the traceability provision is unconstitutional and against the fundamental right to privacy.

The plea said the traceability requirement forces the company to break end-to-end encryption on its messaging service, as well as the privacy principles underlying it, and infringes upon the fundamental rights to privacy and free speech of the hundreds of millions of citizens using WhatsApp to communicate privately and securely.

It said WhatsApp enables government officials, law enforcement, journalists, members of ethnic or religious groups, scholars, teachers, students, and the like to exercise their right to freedom of speech and expression without fear of retaliation.

”WhatsApp also allows doctors and patients to discuss confidential health information with total privacy, enables clients to confide in their lawyers with the assurance that their communications are protected, and allows financial and government institutions to trust that they can communicate securely without anyone listening to their conversations,” it said.

”There is no way to predict which message will be the subject of such a tracing order. Therefore, the petitioner would be forced to build the ability to identify the first originator for every message sent in India on its platform upon request by the government forever. This breaks end-to-end encryption and the privacy principles underlying it, and impermissibly infringes upon users' fundamental rights to privacy and freedom of speech,” the petition said.

It claimed that Rule 4(2) infringes upon the fundamental right to privacy without satisfying the three-part test set forth by the Supreme Court in the K S Puttaswamy judgment -- legality, necessity and proportionality.

It said the rule violates the fundamental right to freedom of speech and expression as it chills even lawful speech and citizens will not speak freely for fear that their private communications will be traced and used against them, which is antithetical to the very purpose of end-to-end encryption.

Rule 4(2) states that a significant social media intermediary which provides services primarily in the nature of messaging shall enable the identification of the first originator of the information on its computer resource as may be required by a judicial or government order.

The new rules were introduced to make social media platforms like Facebook, WhatsApp, Twitter and Instagram -- which have seen a phenomenal surge in usage over the past few years in India -- more accountable and responsible for the content hosted on their platform.

Social media companies will have to take down posts depicting nudity or morphed photos within 24 hours of receiving a complaint.

Notably, the rules require significant social media intermediaries -- providing services primarily in the nature of messaging -- to enable identification of the "first originator" of the information that undermines sovereignty of India, security of the state, or public order. 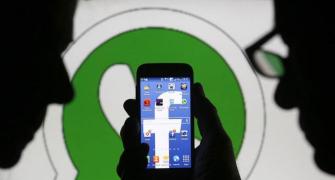