Hathras case: Journalist booked for sedition by UP cops

The Uttar Pradesh police on Wednesday booked four persons including Kerala journalist Siddique Kappan on sedition and other charges at Maant police station in Mathura, two days after they were held while on their way to Hathras. 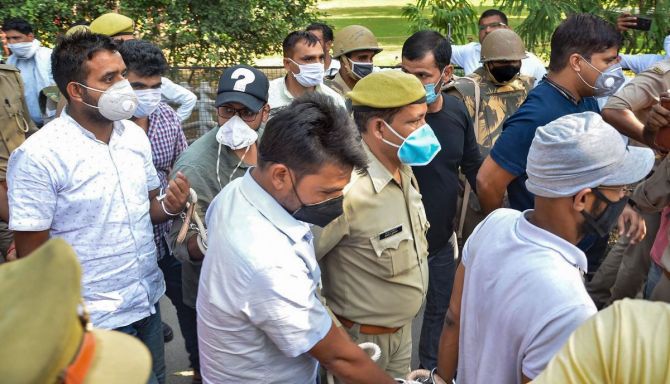 IMAGE: Police produce journalist Siddique Kappan and three others, suspected to have links with the Popular Front of India and its affiliate in Mathura, to a court in Mathura. Photograph: PTI Photo

Charges under the stringent Unlawful Activities (Prevention) Act and the IT Act have also been filed against the four who were later remanded in judicial custody for 14 days by a Mathura court, officials said.

The FIR claimed that police recovered pamphlets "Justice for Hathras victim", six mobiles and a laptop from them, and during the initial probe it was found that they were going to Hathras with an intention "to breach the peace" as part of a "conspiracy".

The four were held on Monday when they were on their way to Hathras, where a Dalit woman had died after allegedly being gang-raped -- an incident that has sparked widespread outrage.

Police had earlier claimed that the four, identified as Kappan, a journalist of Malapuram in Kerala, Atiq-ur-Rehman of Muzaffarnagar, Masood Ahmad of Bahraich and Alam of Rampur, had links with alleged radical group Popular Front of India and its affiliates.

They were on Wednesday booked under various sections of the Indian Penal Code including 124A (sedition) and 153A (Promoting enmity between different groups on ground of religion, race, place of birth, residence, language, etc, and doing acts prejudicial to maintenance of harmony), according to the FIR.

They have also been charged with IPC Section 295A (deliberate and malicious acts, intended to outrage religious feelings of any class by insulting its religion or religious belief).

"The recovered pamphlets, Am I not India's daughter, made with Carrd.co, encourage social discord and public unrest," the FIR said.

The FIR alleged that internet platform 'Carrd.co' and website 'Justice for Hathras' were being used to instigate cast violence, riots and collecting donations.

Such websites are spreading anti-national propaganda in the country and distorting facts to create tension and disturb law and order, it alleged.

In this way, it is clear that prima facie internet platform Carrd.co and website 'Justice for Hathras' have committed offences under various sections of the Indian Penal Code and other Acts.

"The four persons and other unidentified persons have been found to be involved in these criminal acts and an investigation is necessary to find the details of their actions...," it said.

It has to be probed from where and why these websitea are being operated, how much money is being collected through this platform/website, where was this amount used and who were beneficiaries, the FIR said.

Earlier, the Kerala Union of Working Journalists had sent a letter to Prime Minister Narendra Modi seeking Kappan's release and also filed a habeas corpus petition in the Supreme Court.

The Press Association and the Indian Women Press Corps on Wednesday described the journalist's arrest as the Uttar Pradesh government's attempt to "silence" the media and demanded his immediate release.

"The UP government claims that the journalist has links with some groups but has not offered any proof in this regard," they said in a statement.

Uttar Pradesh police had on Monday claimed the four people had links with the PFI which has been accused of funding protests against the Citizenship Amendment Act across the country earlier this year.

The state police had sought a ban on the outfit. 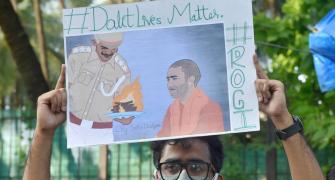