Khattar, Dushyant and some ministers will be sworn-in at 2.15 pm at the Haryana Raj Bhavan on Sunday. 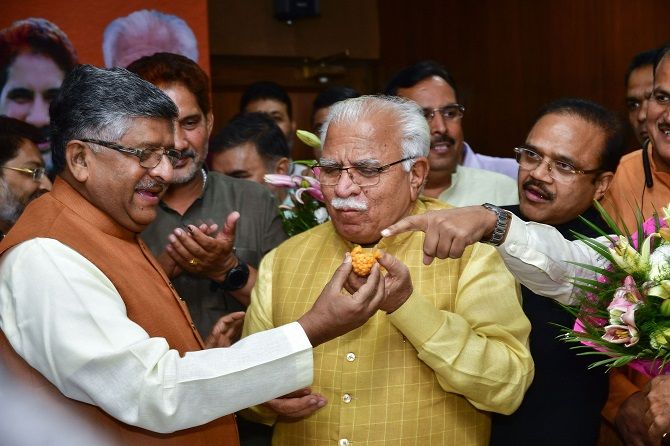 Manohar Lal Khattar is all set to head a new government in Haryana with Jannayak Janata Party leader Dushyant Chautala as his deputy after the governor on Saturday invited him to lead the coalition which also has the support of seven independents.

Khattar, Dushyant and some ministers will be sworn-in at 2.15 pm at the Haryana Raj Bhavan on Sunday.

Six-time MLA Anil Vij, Banwari Lal, Seema Trikha from the Bharatiya Janata Party, while Ram Kumar Gautam and Ishwar Singh from the JJP are among the probables who are likely to get ministerial berths.

Among seven independents who are supporting the BJP-led coalition, late Devi Lal's son Ranjit Singh Chautala is among the frontrunners for the ministerial post, party sources said.

Vij, who was the health minister in the previous term, is the senior most leader of the party to have been elected for the sixth term from Ambala Cantt. 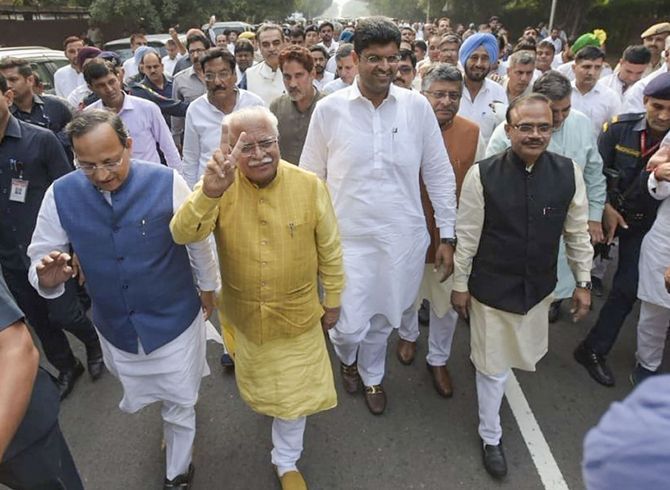 IMAGE: Khattar and JJP chief Dushyant Chautala, accompanied by BJP-JJP leaders, on their way to meet the Governor on Saturday. Photograph: Twitter/PTI Photo

The day saw fast-paced developments with 65-year-old Khattar unanimously elected leader of the BJP's legislative party in Haryana after which the party along with the support of the JJP and seven independents staked claim before Governor Satyadeo Narain Arya to form the government.

Khattar said the governor was informed that a total of 57 MLAs -- 40 of the BJP, 10 of the JJP and seven Independents -- have come together to form the government.

"The governor accepted it and invited us to form the government on Sunday," Khattar said, adding Dushyant would take oath his deputy.

He said the names of the ministers who will also take oath will be made known on Sunday.

The BJP, however, said that it would not take the support of controversial Sirsa MLA Gopal Kanda, who faces two abetment-to-suicide cases.

"I want to clarify one thing that the BJP is not going to take the support of Kanda," said Union minister Ravi Shankar Prasad, Prasad, who attended the legislative party meeting here as central observer along with BJP general secretary Arun Singh.

Dushyant told reporters that the BJP and the JJP have taken a decision to give a stable government for five years.

When asked about the Congress's accusation that the JJP was not respecting people's mandate as it fought the polls against the BJP, Dushyant replied, "I want to ask: did we fight this battle together with Congress? The people gave this mandate against the Congress too.

"Congress is that party which Devi Lal left before 1977. In Haryana, Congress is being led by those who looted the state for ten years, sold 63,000 acres of land, CLU gang was active in state." IMAGE: Khattar and Chautala, accompanied by BJP-JJP leaders, meet Governor Satyadeo Narain Arya to stake claim for forming the next government in the state, at Raj Bhawan in Chandigarh. Photograph: Twitter/PTI Photo

On his father Ajay Singh Chautala's release on furlough for two weeks, Dushyant said that as per jail manual, he could not have come out before Sunday as the Model Code of Conduct was in place in the state till Saturday.

"He is coming out to celebrate Diwali with the family," he said.

Earlier, Khattar and his cabinet colleagues submitted their resignations to the governor, which were accepted. The governor asked Khattar to continue as the interim chief minister till the new government took over.

In the 90-member Haryana assembly, a minimum strength of 46 MLAs is required to form the government.

Earlier in the day, Khattar was unanimously elected as the leader of the BJP's legislative party in Haryana in Chandigarh, with the saffron party claiming that it would provide a 'stable and honest' government in Haryana with the support of the JJP.

The BJP also clarified that there would be only one deputy chief minister in the party-led coalition government in the state.

Khattar's name was proposed by MLAs Anil Vij and Kanwar Pal and seconded by other party legislators including Ghanshyam Saraf and Banwari Lal.

After being elected as the legislative party leader, Dushyant met Khattar at the UT guest house, the venue of BJP meet.

Prasad earlier said the BJP would provide a 'stable, honest and effective' government in Haryana.

To a question on who would be accommodated in the new state cabinet, he said it was the prerogative of the chief minister, who would take a call in this regard after the oath-taking ceremony.

The BJP on Friday had sealed a deal with the JJP to form the government after the saffron party fell short of six seats from the majority mark.

Under the arrangement, the chief minister will be from the BJP and deputy CM from the JJP, which won 10 seats in the polls.