News
Business
Movies
Sports
Cricket
Get Ahead
Money Tips
Shopping
Sign in  |  Create a Rediffmail account
Rediff.com  » News » 'This is not a vote against Modi'

'The voter is cautioning the BJP not to take them for granted.'

"The voter can take average governance of Modi and still vote for him, but the voter is not moved by the average governance of state leaders," Dr Rahul Verma, psephologist, co-author of Ideology & Identity -- The Changing Party Systems of India and currently a fellow at the Centre for Policy Research in New Delhi, tells Rediff.com's Archana Masih. 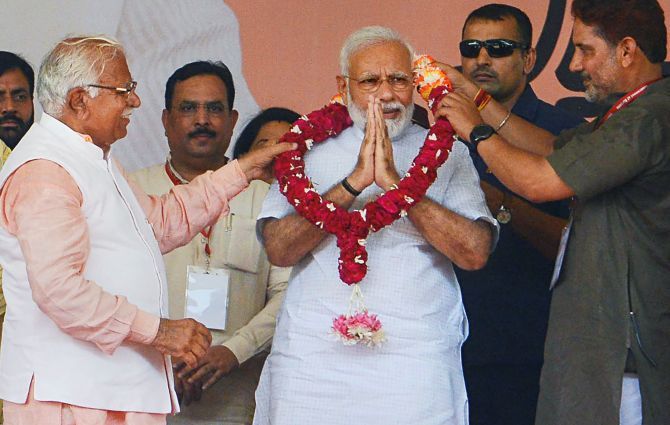 What are the top three takeaways from the results in Maharashtra and Haryana?

The BJP has retained Maharashtra and emerged as the single largest party in Haryana. The party was expected to do really well in both states. The BJP-Sena were expected to get around 190-200 seats in Maharashtra, and around 60-65 seats in Haryana, thus improving upon their previous performance.

The BJP's vote share was above 50% in the Lok Sabha election in both states.

They have come down significantly which means there is no denial that the vote is against the ruling BJP in the states.

It is also to do with the inability of the central government to add anything concrete to take away the pains and miseries of the people in the economic slowdown.

This is not a vote against Modi and Delhi, but just running an average government in a state is not enough.

If this was a total vote against the BJP, then the party would have been further down.

The voter is cautioning the BJP not to take them for granted. The reduced numbers are sending signals to the BJP.

In Maharashtra, the Congress doesn't have a formidable state level leadership, and the party has come further down from its 2014 seat share.

In Haryana, the Congress had a formidable leader like Bhupinder Singh Hooda who put up a challenge and stopped the BJP's juggernaut.

The Congress entered the campaign with the view that the first slot had already been taken, while the BJP paid the price for taking the first slot for granted.

The Congress is paying the price for entering the contest with a defeatist attitude.

Who were the surprises of this election?

Sharad Pawar and Bhupinder Singh Hooda, the two family patriarchs trying to save their bastions and both succeeded.

Both of them campaigned hard and the results are there to see. It shows that if you work hard on the ground, then there is no opposition that is not surmountable.

The surprising element, of course, was the BJP not doing that well.

Equally surprising is the comeback mounted by Pawar and Hooda.

Another takeaway would be the new kid on the block in Haryana -- Dushyant Chautala. He walked away with a lion share of the INLD (Indian National Lok Dal)'s vote.

He presented himself as the true heir of Chaudhary Devi Lal, walking away from his grandfather Om Parkash Chautala.

What does this mean for the Opposition? After the last set of assembly elections when the Congress won three states, but performed badly in the Lok Sabha. Does it have any potential to pick up steam?

This is not a victory for the Congress. The Congress national leadership has bailed on its state leadership.

In Maharashtra the Congress has gone further down to number 4.

In Haryana, Hooda rose in rebellion a few months ago. One cannot take away this performance from Hooda, he really worked hard.

The BJP -- both Haryana Chief Minister Manohar Lal Khattar and its national leadership was too confident of its performance.

The BJP has improved its vote share from the 2014 assembly election, it still maintains a 7% or 8% lead.

We have to remember the context that the BJP was a very weak party in Haryana five years ago, and they still maintain a huge lead over the Congress in Haryana.

They are the single largest party. Hooda has shown how to challenge the BJP and that is where the future of Opposition politics lies -- formidable Opposition leaders challenging the BJP in the states.

I still don't think all this can be combined together at the national level because leaders matter and in front of Modi you don't have a similar challenger.

What has the voter revealed? What is the lesson for the BJP?

The lesson for the BJP is simple -- that you can't take the voter for granted. What is also happening is that there is a Modi vote out there which basically votes for Modi.

So Modi represents something larger, he can mobilise voters for himself when he is the candidate. There is an independent vote for the prime minister, but that vote cannot be taken for granted by the party.

That is the first big lesson.

Secondly, the voter is sending the signal that yes we care about nationalism, Article 370, but you can't take us for granted, the economy is going to be at stake and we will consider when we vote.

So you think the economy has played a role in the minds of voters?

If the BJP had won this election handsomely, we could have said the BJP has managed to divorce politics from economics.

But this election shows that economy matters for certain voters. Trends suggest that the BJP has done poorly in rural areas.

In Maharashtra, the bigger loss has come from Vidarbha which has suffered from rural distress.

In Haryana, the BJP hasn't been able to retain its hold in north Haryana.

What do these results portend for the upcoming assembly elections?

Every election is different. If the BJP had done really well, the cadre would have been confident in Delhi and Jharkhand.

Even if they had done well in these two elections, Delhi would not have been up for grabs.

Arvind Kejriwal remains a formidable opponent and a front runner. This result puts a further break on the BJP in Delhi.

In Jharkhand, the Congress is in tatters, but the JMM is a challenge. These two states seemed like walkaways, but those two states would be tough battles. 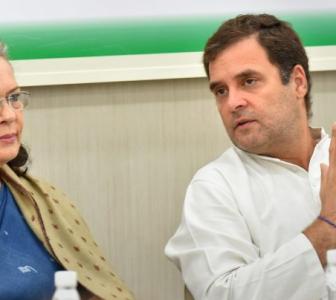