News
Business
Movies
Sports
Cricket
Get Ahead
Money Tips
Shopping
Sign in  |  Create a Rediffmail account
Rediff.com  » News » Cameron has made all the right noises in India

Cameron has made all the right noises in India 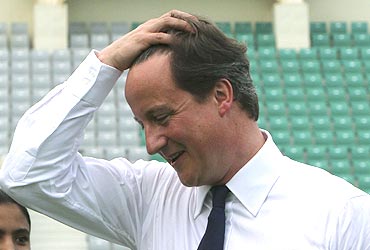 The Conservatives have been clear about India being a priority for the UK since David Cameron's visit to India in 2006.

This sentiment was reflected in the queen's address to the British parliament last month where she laid out the new government's agenda of working 'to establish a new 'special relationship' with India'.

This was significant, notes Harsh V Pant, because no other country, not even the US, was mentioned by name.

The contrast could not be starker. Just a few weeks back, Britain looked tired and weary after 13 years of Labour government. Gordon Brown looked as if he would prefer being anywhere except 10, Downing Street. His government was bereft of cohesion and had neither the will nor the energy to take tough decisions to take Britain out of the morass it seemed to be sinking into.

And so the mixed verdict of the May elections came as a blessing in disguise as it forced two political parties of different ideological persuasion to come together and form the government.

The Conservative-Liberal Democrat coalition seemed a difficult proposition for many in Britain to swallow but the leaderships of the two parties recognised the need for them to work together to solve the big issues facing their nation.

The Conservatives needed a partnership with the Liberal Democrats to shed their image of the nasty party and evolve into a modern political entity that cares about the marginalised and the deprived.

The Liberal Democrats realised that they were as close to power as they would ever be and viewed it as an opportunity to underline their credentials as a party that was capable of governing.

And what a start it has been. Together the Conservative prime minister, David Cameron, and the Lib-Dem deputy prime minister, Nick Clegg, have ushered in nothing short of a revolution in almost all sectors of the polity, economy, and society.

The government has taken its biggest gamble on the economic front where it has unveiled the most severe package of spending cuts and tax increases since the early days of Margaret Thatcher's era.

Defying conventional economic wisdom that governments should increase spending to stimulate growth when the private sector is weak, the new government has decided to cut the annual government deficit by nearly $180 billion over the next five years, shrinking Britain's public sector and instituting tough reductions in the nation's $285 billion welfare budget.

This is not only the steepest fiscal reductions since the 1930s but also a signalling of the government's intent to reduce the size of public sector in Britain which expanded rapidly under Labour.

Foreign policy is also undergoing a revamp, though perhaps not as dramatically as the economic policy. It is nearly 50 years since the American secretary of state, Dean Acheson, touched a raw nerve in the country by saying that Britain had lost an empire but not yet found a role. The search for a role continues under the new political dispensation in Westminster.

Disenchanted with their special relationship with the United States and disillusioned with the overly bureaucratic European Union, Britain is now looking to Asia to develop new partnerships. The aim is to use Asia's economic dynamism to help Britain's status as a major global economy.

The new government has decided to inject a 'new commercialism' into the work of the Foreign Office and Britain's new foreign secretary, William Hague, has written to all 15,000 employees of the Foreign Office to drum up business for Britain, using the country's extensive diplomatic network to lift its economy.

Hague has already been to China and Japan. The British prime minister will also visit China in November. It is in this context that Cameron's visit to New Delhi assumes significance. The Conservatives have been clear about India being a priority for the UK since Cameron's visit to India in 2006.

Cameron had written fondly of India before his visit: 'India is the world's largest democracy, a rapidly growing economy, a huge potential trading partner, a diverse society with a strong culture of pluralism and a key regional player -- a force for stability in a troubled part of the world.' He had suggested that though Britain's relationship with India 'goes deep', it 'should go deeper'.

This sentiment was reflected in the queen's address to the joint session of the British parliament last month where she laid out the new government's agenda of working 'to establish a new 'special relationship' with India'. This was significant because no other country, not even the US, was mentioned by name.

India and Britain had forged a 'strategic partnership' during then British prime minister Tony Blair's visit to India in 2005 and the new government would like to impart it a new momentum.

The UK is the largest investor in India and bilateral trade is worth over £13 billion. Indian students are the second largest group in Britain. Britain supports India's candidature for a permanent seat at the UN Security Council.

As late as last year, then foreign secretary and now a contender for the Labour Party leadership, David Miliband, was hectoring the Indian government that the resolution of the Kashmir dispute is essential to solving the problem of extremism in South Asia.

In so doing, Miliband revealed not only his fundamental ignorance about regional issues but in one stroke he ended up demolishing whatever little credibility Britain had in India.

Granted that Indians tend to overreact whenever there is even an indication of any outside interest on the issue of Kashmir, Miliband's ill-informed pronouncements and complete lack of sensitivity to Indian concerns raised some fundamental questions in New Delhi about the trajectory of British foreign policy.

Miliband was merely trying to assuage the concerns of the Labour Party's domestic constituents, in particular Pakistani Muslims who form the largest share of British Muslims.

But such an approach has left an indelible mark on the Indian psyche of Britain being on Pakistan's side on this most crucial of issues. The Labour government failed to recognise that New Delhi's ties with Washington could only evolve after the Bush administration more or less accepted the merits of the Indian arguments on Kashmir.

It remains to be seen if the new government can muster the will to deal with India as a rising power, not merely as a South Asian entity that needs to seen through the prism of Pakistan. David Cameron has made all the right noises in India.

Against the backdrop of US documents leaked to the Internet whistleblower site WikiLeaks accusing Pakistan's powerful Inter-Services Intelligence of secretly helping the Afghan insurgency even as the country took billions of aid to fight terror, Cameron warned Pakistan against promoting any 'export of terror', whether to India or elsewhere, and said it must not be allowed to 'look both ways'.

He has proposed a close security partnership with India and underlined that Britain like India was determined that groups like the Taliban, the Haqqani network or Lakshar-e-Tayiba should not be allowed to launch attacks on Indian and British citizens in India or in Britain. The British prime minister has also rejected any role for his country in the India-Pakistan dispute.

Emphasising the commercial nature of Indo-British partnership, Cameron led a delegation including six ministers and more than 30 senior executives from top UK firms. BAE Systems and Rolls Royce will supply India with 57 Hawk trainer jets in a deal worth around $1.09 billion.

As Britain and India embark on laying the groundwork for a new special relationship, economics and trade are likely to dominate. But politics has a way of intruding and complicating matters.

After all, it was only in 1997 that during Queen Elizabeth's visit to India that then British foreign secretary Robin Cook offered to mediate between India and Pakistan on the issue of Kashmir, only to be reminded by then Indian prime minister, I K Gujral, that 'Britain is a third-rate power nursing illusions of grandeur of its colonial past.'

Cameron's visit to India should have a more polite ending.

Image: British Prime Minister David Cameron, soon after he hit a shot off a Kapil Dev vall in Delhi on Thursday, July 29. Photograph: B Mathur, Reuters. 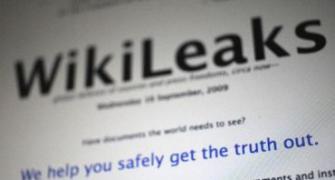 WikiLeaks lesson: Be alert India, they are coming!
David Cameron on 3-day visit to India from today

Pak furious, but Cameron sticks to 'export of terror' comment