Source: PTI
April 16, 2012 13:17 IST
The Pakistan-based Haqqani network is suspected to have carried out the brazen suicide attacks on western embassies and Parliament in Kabul, Afghanistan Interior Minister Bismillah Mohammadi has said.

According to him, one of the militants arrested during the latest attacks on the Afghan capital and three other cities had told the authorities that the Al Qaeda linked Haqqani network was behind the assaults.

The minister told reporters that 36 militants and eight members of the Afghan security forces had been killed in the 18-hour operation to flush out the holed-up militants. The involvement of the Haqqani network, Mohammadi said, was corroborated by another militant caught in Nangarhar Province.

Western officials also said that the attacks bore the hallmarks of the Haqqani network, which has focus on attacks against high-profile Afghan government and foreign targets.

The New York Times quoting the officials said that the network based in Pakistan was a source of tension between Washington and Islamabad. The Haqqani network, officials said, have now become the focus of American military effort.

The Haqqani network was directly involved in one of the last major attacks in Kabul -- an assault on the American embassy in September, and the paper said that the incident also involved militants raining down rockets and gunfire from an unfinished building nearby. "This does have all the hallmarks of the Haqqanis on it," said Colonel Daniel J W King, spokesman for the Nato. "It is been over 150 days since the Haqqanis launched a successful attack on Kabul, they have to do this if they are going to have any credibility."

The United States ambassador in Kabul Ryan C Crocker told CNN that the attacks like this strengthened the case for Americans staying until the Afghans were fully ready to handle the situation on their own.

Admitting that Taliban still retained control of some areas in eastern Afghanistan, Crocker said, "There is a very dangerous enemy out there with capabilities and with safe havens in Pakistan."

"To get out before the Afghans have a full grip on security, which is couple of years out, would be to invite the Taliban, Haqqani and the Al Qaeda back in and set the stage for another 9/11. And that, I think, is an unacceptable risk for any American," the Ambassador said. 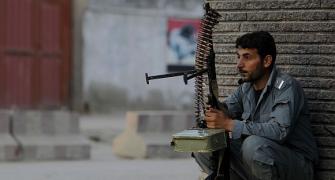 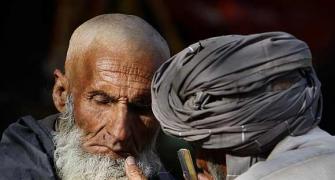 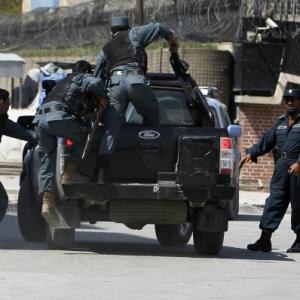