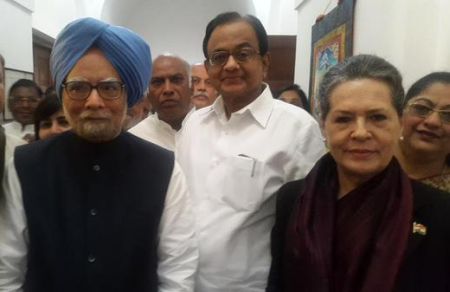 Manmohan Singh is not a popular figure in the Congress, but Sonia's presence, support and strategy are proving a blessing for the good doctor.

When P V Narasimha Rao ran into rough times, Sonia remained indifferent and the Congress left him to the wolves, says Rasheed Kidwai, author of books on Sonia Gandhi and the Congress party.

A beleaguered Congress is sensing a mauka in the naming of former prime minister Dr Manmohan Singh in the murky Coalgate scam.

The presence of a vintage Sonia Gandhi in Manmohan Singh's defence is something that P V Narasimha Rao lacked when Manmohan's guru earned the dubious distinction of becoming the first prime minister to be accused of and convicted in a corruption case.

Dr Singh is the second former prime minister to be summoned as an accused.

And suddenly a dispirited Congress party, caught between Rahul Gandhi's tantrums and the voters's ire, has found an issue.

Left to them, Congressmen would like Dr Singh to spend at least a weekend in Tihar jail so that they can marshal their rank and file to take over some political space.

It remains to be seen if the Narendra Modi government, under pressure from within to act against Dr Singh and the Nehru-Gandhi family, would try to 'fix' the former prime minister on charges that appear grave, or if it will let him breathe easily.

On October 3, 1977, when Central Bureau of Investigation superintendent of police N K Singh knocked on the doors of 12, Willingdon Crescent -- Indira Gandhi's home after she stepped down as prime minister following her electoral defeat -- seeking her arrest, she had asked, 'Where are the handcuffs? Please handcuff me, else I am not leaving.'

Loyalist R K Dhawan quickly summoned some media-persons while Bansi Lal requested the media corps to keep her engaged in questions and answers, leaving the field open for her lawyer Frank Anthony to argue with the CBI team.

In the Congress's assessment, the Modi government's action against Dr Singh has the potential of appearing vindictive, and a go-slow approach may result in upsetting the hawkish elements within the Sangh Parivar.

It feels that Dr Singh's personal integrity is something that would lead to sympathy.

It is an open secret that Manmohan Singh is not a popular figure in the Congress, but Sonia's presence, support and strategy are proving a blessing for the good doctor.

When Narasimha Rao ran into rough times, Sonia remained indifferent and the Congress left him to the wolves. 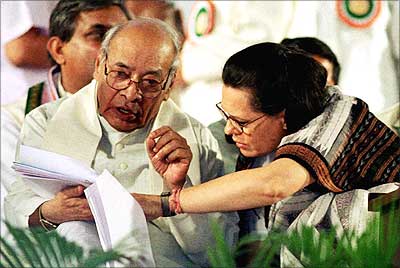 Rao was made an accused in the Lakhubhai Pathak bribery case and had to appear as an accused before Special Judge Ajit Bharihoke in Delhi. He suffered much indignity when Judge Bharihoke kept asking if 'accused number three' was present in court, till Rao, sitting right in front of the judge, rose to say, 'Present, sir.'

Judge Bharihoke glanced at the former prime minister of India and said, 'You may sit down.'

In September 2000, Rao was convicted in the Jharkhand Mukti Morcha bribery case. He was all alone when the news of his conviction was communicated to him at 9, Motilal Nehru Marg, New Delhi.

Except for Chandra Shekhar, Devendra Nath Dwivedi, Maninderjit Singh Bitta and Bhuvnesh Chaturvedi, there was nobody by his side in the numbing hours. Hundreds of Congressmen who had beaten his drum and enjoyed the fruits of power during Rao's tenure as prime minister between 1991 and 1996 were nowhere in evidence.

It was only late in the evening that Congress President Sonia Gandhi drove the furlong from her house at 10, Janpath, to 'console' the man who earned the dubious distinction of becoming India's first public servant-politician to be convicted on corruption charges.

Officially, that day, the Congress even refused to comment on the verdict. In fact, hours before Judge Bharihoke's verdict, Dwivedi, a former solicitor general and Congress general secretary, had boasted that Rao would be acquitted.

Perhaps Dwivedi's overconfidence lulled Rao into believing that he indeed stood in the clear. The judge's words left him completely shattered.

Within the Congress, news of Rao's conviction resulted in a mixed response: There was glee in some quarters, distress in others. Sonia loyalists were pleased even though they did not admit it openly.

During her brief interaction with Rao, Sonia reportedly offered legal help to Rao, pointing to the Congress legal department lawyers. Rao, though in grief, forced a smile, and reportedly folded his hands to thank Sonia, 'Madam, I wish to get acquitted and not weaken my case.'

The Congress legal department was notorious for its incompetence and inefficiency.

Sonia's presence, involvement and sympathy for Manmohan Singh bring a critical difference and explains why the economist is getting the party's backing while his mentor P V Narasimha Rao remained isolated. Sonia rallies to defend Manmohan, says we are fully behind him