Prayers in gurdwaras across America and Canada were held to pay homage to the six Sikh worshippers who were gunned down inside a gurdwara in Wisconsin by a white supremacist. Arthur J Pais reports 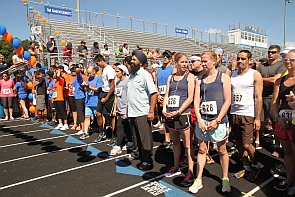 When 15-year-old Gurvinder Singh joined hundreds of others in a charity run for over five miles on a bright Saturday afternoon in Oak Creek, starting at a school ground a few miles from where six Sikhs were killed last year, he was anything but sorrowful.

“Today is a day to celebrate how the community has come together,” he said, pointing out there were over 1,200 people for the run (and elderly for the walk). A majority of them were not South Asians. He echoed the thoughts of many Sikhs who said the run, which was part of a four-day event, which included special prayers, interfaith meetings and candlelight vigils to mark the first anniversary of the massacre on Saturday, showed how resilient the Sikh community was. The community had shared not only their pain but also given moral and material support.

“I do not live in fear,” said Gurvinder, son of the slain priest Ranjit Singh, who saw his father for the first time -- in a coffin. Ranjit Singh had been saving money and waiting for his green card to go back to India to get his family to America. “I go to school here, my mother and two sisters are here because of the help we got not only from Sikhs but also Americans.”

His mother and sister walked several miles at the event which was also held to raise money for scholarship for needy children. “When you find so much of love and support, you stop worrying over what someone crazy can do,” Gurvinder Singh said. “If rabba has a time table to for me to go at a time, I am ready. My father lived in a rough neighborhood of African Americans in Milwaukee, about 20 miles from the gurdwara and nothing bad ever happened to him there, but he was killed by a white man at the temple!”

The race and walkathon was called Chardi Kala, the Sikh term for perpetual optimism even amidst a horrendous tragedy.

Throughout the events, Sikh activists and organisers emphasised that the Oak Creek is much more than a Sikh tragedy. “It is an American tragedy,” said Pardeep Kaleka whose father Satwant Singh Kaleka, the president of the gurdwara was slain at the temple on August 5 last year.

“An attack on people at a religious place or anyone anywhere else by someone who has a political agenda or is filled with hate is an attack on the American ideal of an inclusive society,” Kaleka, who has formed an organisation of his own to reach to children in Milwaukee inner city schools and get them to know about multi religious and multi cultural America, has also made friends with a son of white supremacist leader.

Arno Michaelis, 47, who says he gave up his hate filled life many years ago when he began introspection of his soul following the birth of a daughter, works with Kaleka’s organisation Serve2Unite which also works to counter violence with peace. Kaleka, Michaelis and others visit middle schools and high schools, where Kaleka describes how gunman Wade Michael Page attacked the worshippers at the gurdwara and how the community has sought to forgive him.

“It was not easy to forgive Page for what he did,” said Raghvinder Singh whose father, a visiting temple priest from New Delhi, was shot in the neck and is in a near comatose condition in a rehab hospital some 30 miles from the shooting site. “But if your spiritual foundation is strong you learn to forgive though you cannot but remember what happened too.”

His mother who is in her early 60s walked nearly three miles. Raghuvinder and his younger brother take turns to stay with their father in the hospital 24/7. Soft gurbani recital is played in the room continuously. “A few months ago, I thought he was moving his lips as he was chanting,” Raghuvinder Singh said. “We thought a miracle is happening but he had a set back, he had seizures and we are hoping there would be another miracle.”

Prayers were held in gurdwaras across America and Canada to mark the anniversary of the shooting, and many gurdwaras held a service day to mark the tragedy.

Speakers at the rally invoked the memories of an attack on an African American church in Alabama which killed four children in 1963 and how it empowered the civil rights movement in America. Several recent killings including the Sandy Hook, Connecticut school massacre were mentioned at the Oak Creek rally. Multi color balloons representing the victims of recent massacres were floated at the start of the rally.

Robbie Parker, whose six year old daughter Emile, was one of the children killed in Sandy Hook, was a powerful speaker at the Oak Creek memorial. He said  while we seek to deal with hatred, envy and other moral problem in our enemies, we should also look within ourselves and seek to deal with similar moral failures within our  own selves.

Parker received a standing ovation at the rally. And so did the retired police officer Brian Murphy whose bravery in fighting Page despite receiving multiple shots has become legendary. Officer Murphy, who still has a very hoarse voice because of one of the injuries he had received, spoke about the resilience that leads a community to stand up on its feet, heal itself and be embraced by the larger community.

“The men and the woman who died at the gurdwara a year ago are heroes,” said Kamaljeet Singh Kalsi, the first Sikh in many decades who was granted special permission to serve in the US Army, with a turban and beard. He had addressed the gathering a few hours before he spoke with Rediff.com as he waited to see Baba Punjab Singh at the rehab center.

“To humbly display your religious identity in the middle of so much of hatred for diversity is itself an act of heroism. Their senseless killings are not in vain. As we saw today, so many people are learning about Sikhism and want to embrace us.”

At the rally, he gave a brief but powerful speech. “To the hate groups that hide in the ark recesses of our country,” he said resolutely, “I want to show you that we are not afraid.”

Kalsi, who received a bronze star for his services in Afghanistan as an emergency physician, added: “This is my home and my turban is an integral part of the fabric of this great nation.”

Image: The prayer meet in memory of the Gurdwara shooting victims 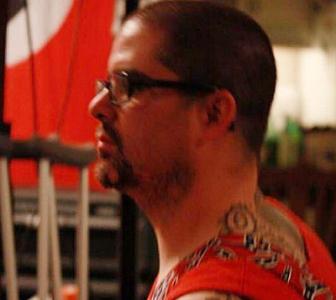 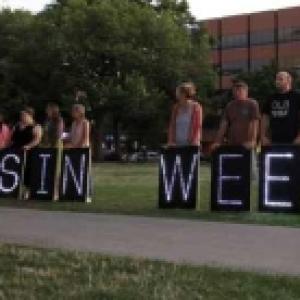 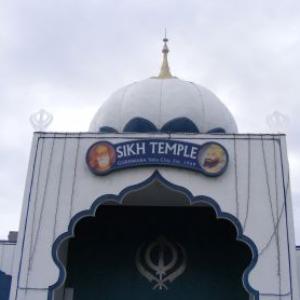