Gujarat set to roll out red carpet for Japanese PM 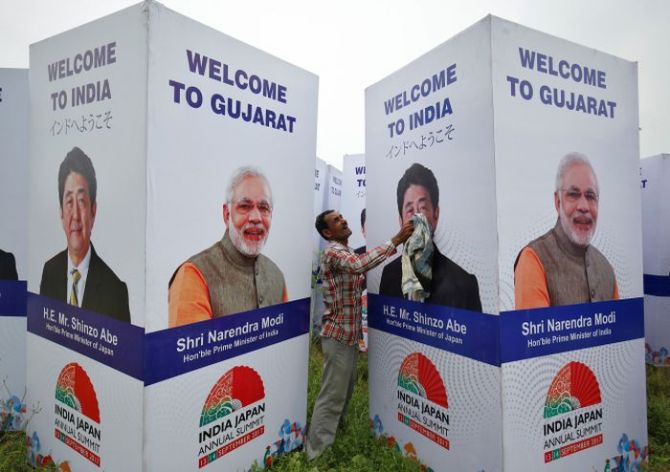 Gujarat will roll out the red carpet for Japanese Prime Minister Shinzo Abe who arrives in Ahmedabad on Wednesday on a two-day visit during which he will lay the foundation stone for India's first bullet train project.

The twin cities of Ahmedabad and Gandhinagar, which will host a slew of programmes during the high-profile visit, are all decked up to welcome the foreign dignitary with streets shimmering in fluorescent lights, and hoardings and banners welcoming Abe dotting them.

Robust security arrangements have been put in place for the 12th Indo-Japan Summit and business meet where Japanese companies are likely to announce major investments in Gujarat.

The visit will begin on Wednesday afternoon with an 8-km roadshow where Abe will be accorded a grand welcome, officials said.

Prime Minister Narendra Modi will be present through the roadshow with Abe with people lining the streets their cavalcade would pass through.

They will visit Sabarmati Ashram and iconic Sidi Saiyyed Mosque in the eastern part of the city famous for its intricate stone lattice work on Wednesday.

Modi will host dinner for Abe at a hotel in the old city area.

Ahmedabad has been recently included in the World Heritage City list. Japanese PM will be given an overview of the heritage of the city in prime minister Modi's home state.

On Thursday, Abe and Modi will lay the foundation stone for the high-speed train project between Ahmedabad and Mumbai which is expected to be completed by 2022, and is likely to traverse the distance of over 500 km between in around two hours.

Japan has extended a soft loan for the ambitious project conceptualised by Modi.

The two leaders will hold the 12th Indo-Japan annual Summit meeting at Gandhinagar after which agreements will be exchanged.

Later, an India-Japan business plenary meeting will be held.

"We are thankful to the Japanese PM for selecting Gujarat for his visit to India," Gujarat chief secretary J N Singh said.

Fifteen agreements will be signed for investments in Gujarat during the visit of the Japanese prime minister, he said.

Abe's spouse Akie Abe will accompany him and also have a busy schedule. She will be visiting a number of places including an NGO -- Blind People's Association. IMAGE: Police officials and hotel staff stand at the entrance of a hotel where Modi is expected to host a dinner for Abe in Ahmadabad. Photograph: PTI Photo

Preparing to receive his Japanese counterpart, Prime Minister Modi on Tuesday said India truly values its ties with Japan and that he looked forward to further boost the bilateral relations in a wide range of areas.

'I look forward to welcoming PM @AbeShinzo. I will be hosting him in Gujarat in our fourth annual summit together,' Modi tweeted in English as well as in Japanese.

'PM @AbeShinzo and I will attend a wide range of programmes on 13th and 14th September 2017, aimed at further boosting India-Japan ties,' he added.

In another tweet, he said the two leaders will attend a programme to mark the start of work of India's first high-speed rail project between Ahmedabad and Mumbai.

The train is expected to significantly reduce travel time between the two cities. Japan is a pioneer in high-speed rail networks, and its Shinkansen bullet train is among the fastest in the world.

'India truly values the relationship with Japan and we look forward to further boosting our bilateral ties in a wide range of sectors,' the prime minister said.

The two leaders will review the recent progress in the multifaceted cooperation between India and Japan under the framework of their 'Special Strategic and Global Partnership' and will set its future direction, said a statement on narendramodi.in.

A civic reception will be held for the Japanese prime minister in Ahmedabad on Wednesday evening where the cultural diversity of India will be showcased through a series of performances.

The two leaders will also visit Dandi Kutir, the museum dedicated to Mahatma Gandhi, at the Mahatma Mandir.

Over 9,000 police personnel will fan across strategic locations in Ahmedabad to secure it for the two-day visit of Modi and Abe, officials said on Tuesday.

Tight security arrangements have been put in place, they said.

As Modi and Abe are also scheduled to visit Gandhinagar on Thursday, over 2,000 policemen will be deployed in the state capital to guard them and other dignitaries. 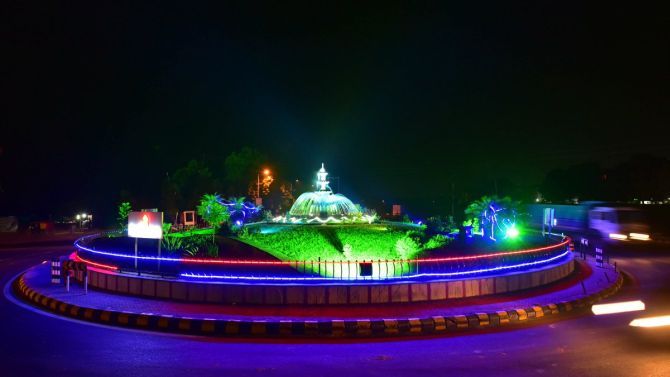 IMAGE: The twin cities of Ahmedabad and Gandhinagar, which will host a slew of programmes during the high-profile visit, are all decked up to welcome the foreign dignitary with streets shimmering in fluorescent lights, and hoardings and banners welcoming Abe dotting them. Photograph: @PMOIndia/Twitter

According to Balram Meena, Deputy Commissioner of Police (DCP), Control Room, around 70 per cent of the city's police force will be deployed as part of the security arrangements on Wednesday.

"To provide enhanced security, we will also deploy 12 companies of the state reserve police (SRP), bomb squad and quick Response teams. We have also sent a request to send a team of NSG commandos. They may also join us," he said.

According to Meena, the city police on Tuesday performed a rehearsal along the entire route of the road show using the same number of vehicles that would be part of it tomorrow to see how much time it would take and what are the areas where improvement is needed.

On September 14, Abe and Modi are scheduled to lay the foundation stone for the bullet train project in Ahmedabad before attending the India-Japan Annual Summit at Mahatma Mandir in the evening.

As many as 10,000 people would attend the ground-breaking ceremony for the bullet train project to be held at the Athletics Ground near the Sabarmati Railway Station in the city.

"We will deploy one IG-level officer along with six Superintendents of Police (SP)-level officers to supervise the entire security arrangements. Others, who will be deployed across Gandhinagar include, six assistant SPs, 35 deputy SPs, 70 inspectors, 150 sub-inspectors and 1,800 other policemen," Jadeja said. 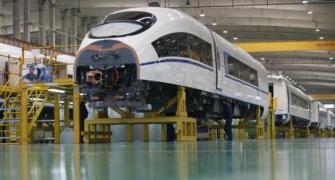 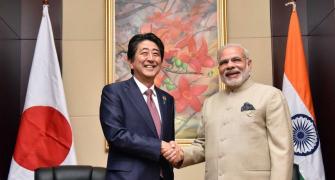 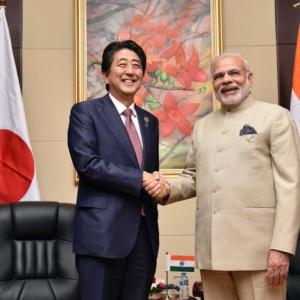 In a first, Modi to hold roadshow with Abe in Ahmedabad