Riding high on the charisma of Prime Minister Narendra Modi, the Bharatiya Janata Party on Thursday retained power in Gujarat for a record seventh straight term pulverising the opposition to secure the biggest majority ever in the state. 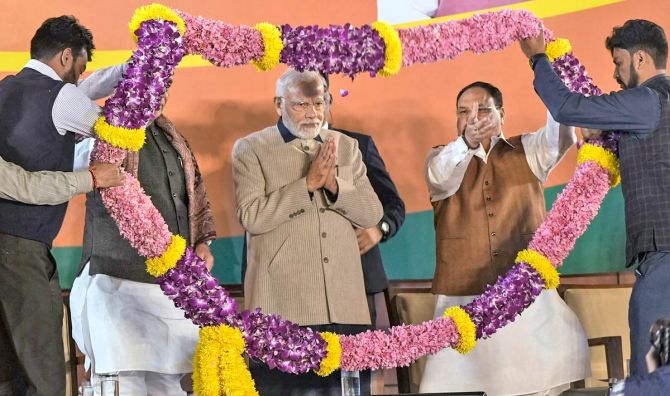 While the Bharatiya Janata Party set new records in the home state of Modi and Home Minister Amit Shah with its "historic" and "phenomenal" victory for a three-fourths majority, it lost Himachal Pradesh to the Congress after a close fight, as the hill state continued with its tradition of nearly four decades in voting out the incumbent party.

The vote share difference for the winning Congress and the BJP in Himachal Pradesh was less than one per cent, a point also noted by Modi and BJP president J P Nadda in their address to party workers at the BJP headquarters in Delhi in the evening.

While the Congress, which got a simple majority, polled 43.9 per cent votes, the vote share for the BJP in the home state of Nadda was 43 per cent.

As Modi continued to hold sway over voters and addressed 31 election rallies in Gujarat, the BJP also checkmated the new entrant Aam Aadmi Party in the first ever triangular contests in the state and pushed the Congress down to its all time low.

Gujarat state BJP president C R Paatil said Bhupendra Patel, the party's 60-year-old soft-spoken face in the state, would remain as the chief minister and his swearing-in ceremony would be held on December 12. Patel won the Ghatlodia seat in Ahmedabad by a huge margin of 1.92 lakh votes. Modi said he was overcome with lot of emotions on the "phenomenal election results" in Gujarat.

He lauded party workers in the state, saying each of them is a champion. "This historic win would never be possible without the exceptionally hard work of our Karyakartas, who are the real strength of our party."

"People blessed the politics of development and at the same time expressed a desire that they want this momentum to continue at a greater pace. I bow to Gujarat's Jan Shakti," he said in a tweet.

At the party event, Modi said Gujarat has broken all records and created history.

The BJP, which focused on a development agenda and overcame anti-incumbency yet again without losing an election since 1995, also equalled the Left Front's feat of seven consecutive terms in West Bengal. The Communist Party of India Marxist-led Front ruled the eastern state for 34 years from 1977 to 2011.

The BJP, for whom Hindutva remained a political strategy, got support from all sections bagging 155 seats and was leading in 1 in a House of 182. It garnered a vote share of nearly 53 per cent which was the highest for the party in the western state.

The BJP, which bagged 99 seats in 2017 assembly polls with a 49.1 per cent vote share, surpassed its previous best showing of 127 seats in 2002 when Modi was the chief minister. Congress holds the all-time record of 149 seats that it had won in 1985 under the leadership of Madhavsinh Solanki. 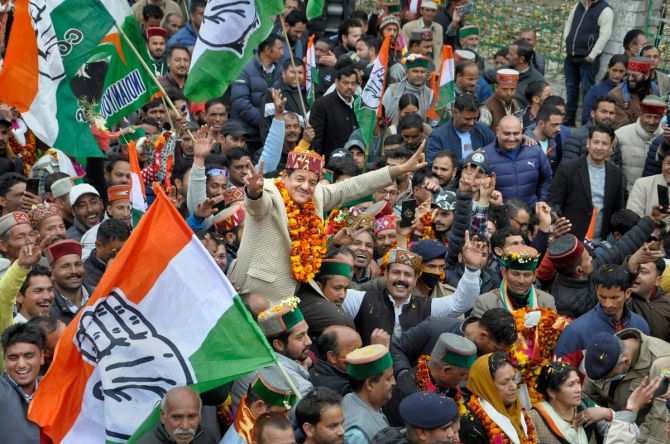 With a nearly 13 per cent vote share, the Arvind Kejriwal-headed AAP won only five of the 181 seats it contested. In a video message, the Delhi Chief Minister said though the AAP has not won many seats the votes the party got helped it attain the national party status. The AAP also called its showing impressive.

"The biggest credit for this victory goes to public's trust in the leadership of Prime Minister Narendra Modi, his popularity and credibility. Congratulations to him and thanks to the public," Singh said.

Amit Shah said Gujarat has rejected those who do politics of hollow promises, revadi (freebies) and appeasement. "Gujarat has given an unprecedented mandate to Prime Minister Narendra Modi's BJP, which worked for public welfare and development."

After giving a tough fight to the BJP in 2017 Assembly polls in Gujarat by winning 77 seats, the Congress has hit a nadir in the western state where the party's campaign, mostly shouldered by local leaders, has leaned on door-to-door canvassing for votes as its leader Rahul Gandhi chose to stay away to focus on the 'Bharat Jodo Yatra'. Rahul had aggressively campaigned in 2017.

The AAP also appeared to have played spoilsport for the Congress. With a vote share of nearly 28 per cent, the Congress won 17 seats.

The BJP managed to improve its 2017 tally as the issues it faced in the 2017 state polls like the state-wide outburst of anger among the Patidar community and restlessness among the traders over the GST regime appear to have faded. Hundreds of BJP workers thronged the party office in Gandhinagar as they danced and distributed sweets outside the Gujarat state party headquarters.

Though the opposition in Gujarat took on the Modi government over rising inflation, slowing growth and joblessness, the economic troubles apparently did not dent BJP's popularity in the state that has been a bastion of the party for decades and where Modi was chief minister from 2001 to 2014.

While the Congress was not expected to replicate its creditable performance of the last Assembly elections, a good showing by the AAP could have helped Kejriwal cement his place as a key challenger to Prime Minister Modi in the 2024 Lok Sabha polls. The AAP is also in power in Punjab.

The AAP had carried out a high-decibel campaign and emboldened by the victory in the Delhi municipal elections it had hoped its politics of welfarism will be accepted by the people in Gujarat.

Journalist-turned-politician Isudan Gadhvi, who was AAP's chief ministerial face, and Gopal Italia, the party's state president, were among the prominent losers from the party camp.

Several state leaders of the Congress party including its former leader of opposition Paresh Dhanani lost. However, its senior-most leader in the state, Arjun Modhwadia won while firebrand Dalit leader Jignesh Mevani reversed early losses to post a victory. 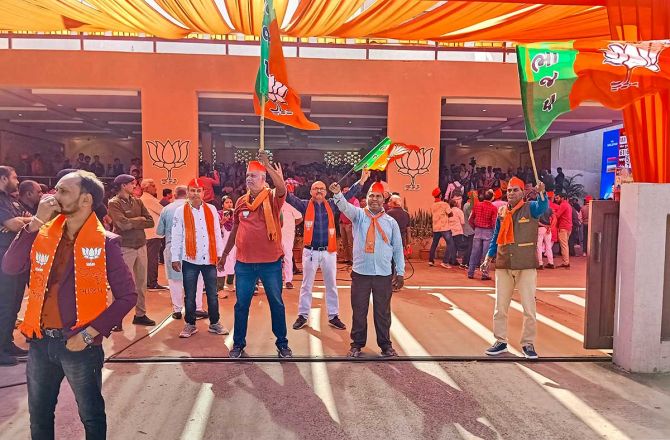 In Himachal Pradesh, the Congress won 40 of the 68 seats at stake followed by the BJP, which bagged 25. Independents won three seats.

The AAP, which had fielded candidates in 67 seats, failed to make a debut and had a meagre vote share of 1.1 per cent.

Congress leaders in Himachal Pradesh credited its general secretary Priyanka Gandhi for its win which came as a boost for the grand old party.

Chief Minister Jai Ram Thakur, who won for the sixth time from Seraj assembly seat in Mandi district, said he respects the mandate of the people and submitted his resignation to Governor Rajendra Vishwanath Arlekar.

Anti-incumbency against the BJP government and the issue of price rise coupled with the Congress promising restoration of the old pension scheme and providing Rs 1,500 to every adult woman in the state seemed to be the main factors that worked in favour of the Congress.

With the BJP slogan of 'Raj nahin, riwaaj badlenge' (changing tradition and not the government) being rejected by voters, Congress leader Rahul Gandhi thanked the people for the "decisive win" and assured them that every promise made by the party will be fulfilled.

All India Congress Committee in charge of Himachal Pradesh Rajeev Shukla hailed Priyanka Gandhi's campaign and leadership, lauding the "hard work" put in by her.

Senior Congress leader Anand Sharma said the Congress victory will have resonance and ripple effect in the poll-bound states next year. 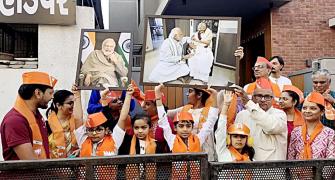 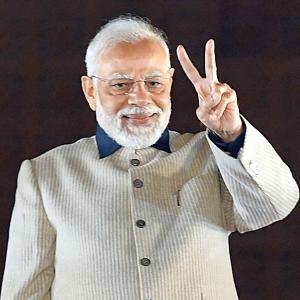