News
Business
Movies
Sports
Cricket
Get Ahead
Money Tips
Shopping
Sign in  |  Create a Rediffmail account
Rediff.com  » News » 115 seats. Is this the best Modi can do? 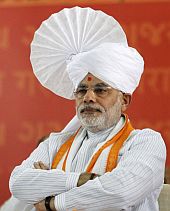 Now that the numbers are out and it is nowhere near as spectacular as expected/feared by some or hyped by many -- it is Narendra Modi's lowest in three elections -- it is a sobering thought.

Is this the best he can do, wonders Saisuresh Sivaswamy.

For weeks one had been bombarded by the Narendra Modi blitzkrieg whose intensity was of a scale that would induce large-scale distortion of perception and reality, something like what mass hypnotists do to a spellbound audience.

Rather like those conjurers, Modi, it seemed, was everywhere thanks to his 3D projections. There was nowhere you could run: He was there virtually, in Google Hangout, and in the pinpoint carpet-bombing by his followers on social media.

If you let yourself be mesmerised by this you would believe, as a few vocal ones do, that Modi is the future; that the Gujarat election was merely the first stepping stone in his impending trek to the prime ministership.

Thankfully, there is something called a reality check that, well, reality enforces on you. And that moment arrived on Thursday.

All along, one had been brainwashed into believing that Gujarat was Modi's pocket borough, and the state, barring the 'pseudo-seculars' acting at the behest of the Congress party, would rally behind him as never before.

The never-before part is interesting. On the heels of the 2002 carnage of Muslims, which pitchforked Modi into national prominence, not all of it the positive kind, was his high point. Bagging just a tad less than 50 per cent of the vote he romped home with 127 seats in the assembly.

This time, we were told by his numerous followers for who he has by now assumed the form of the 10th avatar of Vishnu come to save mankind -- okay, not all of it but at least to save Bharat -- the number would be phenomenal. 125+ was the minimum (never mind, it would still be less than 2002) but in sight was the 145 seats scored by the Congress under Madhavsinh Solanki in 1985. That was thanks to mobilisation of another kind.

Now that the numbers are out and it is nowhere near as spectacular as expected/feared by some or hyped by many -- Modi has bagged just 115 seats, his lowest in three elections -- it is a sobering thought. Is this the best he can do?

Yes, Modi has won his third consecutive term which maybe something to cheer about for the Bharatiya Janata Party (it really shouldn't cheer about him if it knows what is best for it and the nation), but is nothing new.

Sheila Dikshit has done in it Delhi trouncing -- who else! -- the BJP. Naveen Patnaik has done it in Orissa, first in league with the BJP and then against it. So has Tarun Gogoi in Assam. And this is only in the recent past.

So if Modi has neither won an unprecedented mandate in either seats or number of terms, what is all the hype about?

Or is that not a question that should be asked at a time when the vocalites are telling us the future is him?

These voices will only get shriller in the day as more election data pours in. Already, that the BJP, despite not putting up a single Muslim candidate, has won in some community boroughs is being held up as a vindication of the state government's dubious role in the 2002 anti-Muslim riots.

If poll results are meant to wash away the stains from the past, the judicial function may as well be handed over the Election Commission of India.

By talking of 2002 one runs the risk of getting branded as being stuck in the past when the affected community has so clearly moved on. Or get poked with another popular rejoinder: Anyway, wasn't the Congress guilty of a similar crime in 1984 when it targeted Sikhs?

I don't think either the Muslim community has moved on, or that the analogy to the Congress's misdeed in 1984 is correct.

Taking the second one first, the Congress has more than atoned for its sin by making a Sikh the prime minister since 2004. On the contrary, the BJP has not made a Muslim a chief minister, not in Gujarat or elsewhere, so there has neither been a verbal nor active expression of grief till date.

And the first point about Muslims not moving on, takes me to a recent community event where I happened to be the lone non-Muslim. Since there was nothing about me, neither dress nor language, to show the others I was not one of them, tongues wagged freely in my presence despite the sombre occasion.

Since men are prone to discuss politics at any event, the talk turned to Narendra Modi. From anger to dismay, the sentiments ran the entire gamut.

One of them was articulate, comparing what Modi has done to the community in Gujarat to what Aurangzeb had done to Hindus in the past, and spoke of the present as a time when they were paying for past sins.

I realised then, that despite all talk of normalcy, moving on, for a large number of non-Hindu Indians Modi's ascendancy is a petrifying thought.

As for me, speaking purely as a practising Hindu Indian, what he represents is in tune with neither the religion I believe in nor with the ideals of the nation I belong to.

The BJP, claiming to speak for both, is in reality speaking only for itself. Shellshocked by its defeat in 2004, and silenced by its realisation that there is no vote-catcher in its midst, it is casting its lot with the Gujarat chief minister.

Despite the Modi cult running counter to everything the Rashtriya Swayamsevak Sangh stands for, there is a silence of complicity in a party filled with papier mache leaders. No wonder Modi, with his three consecutive terms, seems like the new demigod.

That was the best the moderate Vajpayee could manage, and Modi knows he needs to do much better to dispense with pesky allies like Nitish Kumar.

Hence the new mantra of development that he has been harping on, a mantra that many more qualified and knowledgeable than me have picked holes in.

Everyone knows that the prerequisite for economic development is peace. Gujaratis, given their industry and drive, have bought into Modi's recipe for peace. But the rest of India needs to remind themselves that peace can also be found in a graveyard.

Is that what we seek for the nation, too?

Narendra Modi at the doorsteps of New Delhi

Gujarat 2012 tells us a larger story beyond Modi