In a heart-warming tale of communal amity, a Muslim youth performed 'kanyadan' of a tribal Hindu girl at a village ravaged during the 2002 post-Godhra riots even as her own relatives stayed away.

The members of the Muslim community living in the Soni locality of Panwad village in Kawant taluka in Gujarat extended a helping hand to Madhuben Rathwa, a tribal widow, making arrangements and playing the host at the wedding earlier this week.

"We decided to help Alpa (Madhuben's daughter) as she has no brother and her widowed mother is an 'anganwadi' worker. Theirs is the only Hindu tribal family in the Muslim-dominated Soni locality of the village," a villager Farid Soni said.

With fellow villagers Vallibhai Patel, Rehman Soni, Rasul Tailor and others, Farid shouldered the responsibility of taking care of the 'baraatis' who came from Vav village for Alpa's marriage with Rajesh Rathwa.

"We also presented her jewellery and other household items. The entire expenditure over these was borne by members of our community," he said.

Acknowledging their generosity, Madhuben said, "The marriage ceremony of my daughter could not have taken place without the help from the members of the Muslim community as my own relatives stayed away. This may be due to my staying in this locality of the village," she said.

"It was a most enjoyable event and we were very excited about Alpa getting married. Members of our community wholeheartedly participated in it," said Rehman, delighted at the ceremony passing off smoothly.

The village was torn by communal strife in 2002 after the Godhra train carnage and several Muslim families had to flee the frenzy when tribals caused heavy damage to their properties.

Though no one died in the communal flare-up in Panwad, the wounds took years to heal.

About 100 houses, shops and kiosks had allegedly been looted and set ablaze as tribal hordes, armed with bows and arrows, unleashed violence.

A decade after the conflagration, members of the minority community consider Alpa as their sister and played the role of her brothers at the wedding.

The Muslims of Panwad had voted for Alpa and got her elected as a member of the village panchayat some time ago.

Sukhram Rathwa, a former Congress MLA from Kawant, under which Panwad falls, told PTI, "The incident shows that

normalcy has returned to this village, which has set a good example of communal harmony." 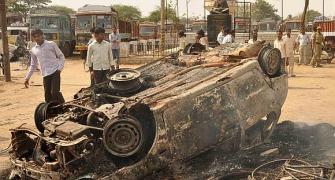 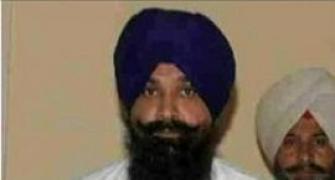