Gowda says there will be mid-term polls in Karnataka

In a sign of growing tensions in the ruling alliance in Karnataka, former Prime Minister and Janata Dal-Secular supremo H D Deve Gowda on Friday said there was no doubt that there would be mid-term polls to the state assembly. 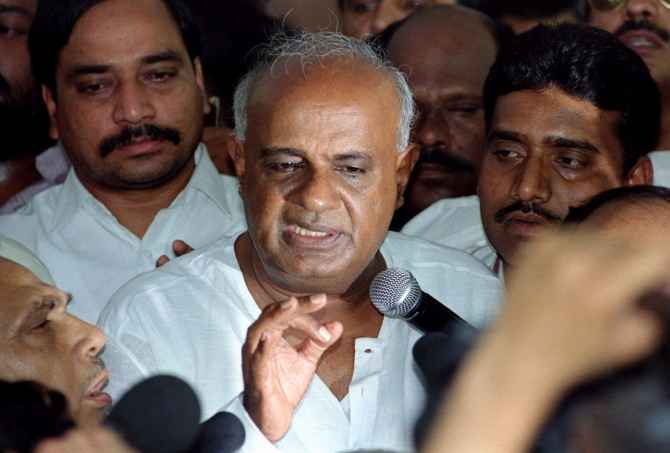 Gowda also said he did not know how long the Congress-JDS government, headed by his son H D Kumaraswamy, would continue and it was in the hands of the senior coalition partner.

"There is no doubt that there will be mid-term polls. They (Congress) had said they will give support to us for five years. I am watching all the developments and their behaviour. Our people are intelligent enough. We need not have to teach them," he told reporters in Bengaluru.

As his remarks sent alarm bells ringing in the shaky coalition, Gowda backtracked and said he was only referring to the grama panchayat and local body elections.

"I have spoken about local body elections, not assembly polls. I am here to build my party. As Kumaraswamy mentioned, the government will continue for the next four years," he said.

Gowda's salvo earlier came amid reports that Congress Legislature Party leader and former chief minister Siddaramaiah had conveyed to party president Rahul Gandhi that the alliance was causing damage to the grand old party and it became clear in the recent Lok Sabha polls' outcome.

The Bharatiya Janata Party had crushed the Congress and JD-S, winning 25 of the 28 Lok Sabha seats and leaving only one seat each to the two alliance partners.

The BJP-backed independent candidate had won the Mandya seat.

Amid confusing signals, Siddaramaiah tweeted, "The news about me recommending INC India President Shri Rahul Gandhi to break coalition ties are baseless and is nothing, but a figment of the imagination."

"Speculative journalism is sending wrong signals to the people of Karnataka and will disturb the smooth functioning of our govt," Siddaramaiah said.

He reiterated in his tweet that he has no doubts that the government would function for the next four years and wondered why others have doubts about it.

Gowda said he has started the exercise of strengthening the party by conducting various meetings with the leaders.

"We will continue doing our work...these programmes will go on. I don't know how long this government will stay. It is in the hands of Congress leaders and not Kumaraswamy," the JD-S supremo said.

He also reminded the Congress leaders again that it was they who had approached the JD-S to form the government with Kumaraswamy as the chief minister.

"I was not after the formation of the coalition government. It is they (Congress) who came to us. I don't know whether they agreed for it or the Delhi high command directed them to do so," he added.

Gowda, who was defeated from Tumkur Lok Sabha constituency, also spoke about how he has been blamed for it.

"We had got eight seats in the seat-sharing arrangement with the Congress. I told (Congress President) Rahul Gandhi that if you think you do not want a particular seat then give us the one you had lost.

Did I ask for Tumkur? No. Siddaramaiah had told me.He said he did it for Mysuru (to win Mysuru seat). They have openly said I am responsible for the defeat in Tumkur and Mysuru. Leave it now," he said.

Kumaraswamy also went into a damage control mode and said his government was safe.

He asserted that his father has been misunderstood.

"What he has said is that be prepared for the urban local body elections. Deve Gowda has not said that the assembly election will take place. He has also given a clarification. There is no question of mid-term polls. The government will continue for the next four years," he said.

He also said the government would focus on rectifying the mistakes.

Reacting to Gowda's remarks, BJP state president B S Yeddyurappa said there was no need for the mid-term polls and people would not like it.

He asserted the BJP would not let it happen and, if required, it would form the government.

"I want to make it clear that we will not let the mid- term poll to happen. We are 105 (MLAs). If they have the capability, then let them continue or else, let them go. We will run the government. People will not accept election within a year and there is no need for it," Yeddyurappa said.

Deputy chief minister G Parameshwara said he did not know in what context Gowda said so, but insisted that the government would continue.

"Small discrepancies, discord and differences of opinion surface when we run a coalition government... The coalition dharma calls for taking everybody along, ignoring the differences," Parameshwara told reporters. 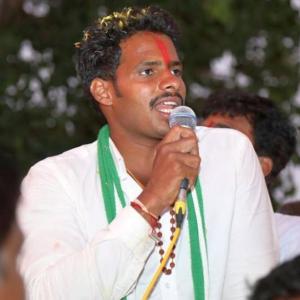 JD-S should be ready for polls: HDK's son to cadres