Tamil Nadu Chief Minister Jayalalithaa on Friday said her government had overcome 'various hurdles' to secure 66 tmcft of Cauvery water as she asked partymen to help secure all 40 seats in the next Lok Sabha polls to ensure the state has a greater say at national level.

"Karnataka declined to release even a single drop of water from Cauvery. The Centre remained silent. Then we approached the Supreme Court and continued with our struggles and realised 66 tmcft of water from Karnataka which was adamant against releasing water," she said.

By doing so, "we have established our rights on Cauvery," she said, presiding over a mass marriage of party workers in Chennai.

While the Congress-led UPA does not have the intention to notify the Cauvery water dispute tribunal's final award, "there is a possibility of both Congress and BJP forming a government in the coming elections," she said.

Alleging electoral considerations, she said both parties were supportive of Karnataka in the inter-state river dispute.       At "no cost" can either of these parties form a government in Tamil Nadu and therefore they were 'favourably' poised towards Karnataka, she added.

"The Centre remained silent for six years by not notifying the final award and the (then) DMK government did not initiate any action for "selfish reasons" she said, adding she pursued the matter after becoming Chief Minister in 2011, including moving the Supreme Court, which had directed that the final award be notified by Feb 20, 2013.

"This is a victory to our persistence and determination," she said.

Charging the Centre with "continuously ignoring" Tamil Nadu, she said its rights are being 'deprived' with the state not being given even kerosene.

"It's denying us electricity. Funds are not being granted or are delayed. Even the Cauvery River Authority was convened on the Supreme Court directives."

Tamil Nadu's intentions of making it to the top could come true only if its voice is heard strongly at the Centre, she said stressing for the need for a Central government that would pay heed to the state's "just demands."

For this, the party has to win all 40 seats (39 in Tamil Nadu and one in Puduchery) in the next Lok Sabha polls, and partymen should work towards this, she reiterated. 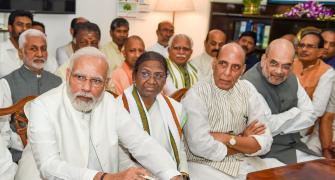