Gangster-turned-builder Ashwin Naik and two of his aides were released from Taloja jail in neighbouring Navi Mumbai on Wednesday, a day after a sessions court acquitted him and some others in a 2015 case of extortion, an official said. Naik, 58, who is wheelchair-bound, was brought to Taloja jail's gate around 1 pm and from there he was taken in a private car, the official said, adding that more than three vehicles were accompanying the car.

He was arrested by the Dadar police in Mumbai in 2015, while he was allegedly collecting an extortion amount of Rs 50 lakh from a builder.

He was subsequently booked under provisions of the stringent Maharashtra Control of Organised Crime Act and the Arms Act.

The sessions court in Mumbai on Tuesday acquitted Ashwin Naik, the brother of late gangster Amar Naik, and seven of his aides of all charges in the case.

Ashwin Naik, an engineering graduate, was left paralysed after he was shot by members of a rival gang in April 1994.

He had allegedly conspired to kill his wife Nita when he was lodged in Delhi's Tihar jail. His wife was shot dead outside her house in Chinchpokli on November 13, 2000, but a Pune court acquitted him in the case in 2009.

He has spent a number of years in jail in connection with over a dozen cases across the country pertaining to extortion, narcotics and murders.

He was first arrested by West Bengal police on August 1, 1999, when he was trying to cross the India-Bangladesh border, officials earlier said.

Apart from jails in Mumbai, the gangster had also been lodged in Pune's Yerawada Central Prison and Delhi's Tihar jail.

His elder brother Amar Naik was shot dead in a police encounter in the 1990s. 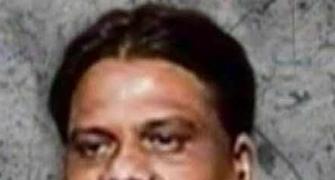 How a chemistry postgraduate turned into a gangster