Cheng Lee, 67, a Chinese Indian, has been flipping television news channels at his home in the city since Tuesday trying to keep track of the Sino-India standoff in faraway Ladakh, in which 20 Indian Army personnel were killed on June 15. 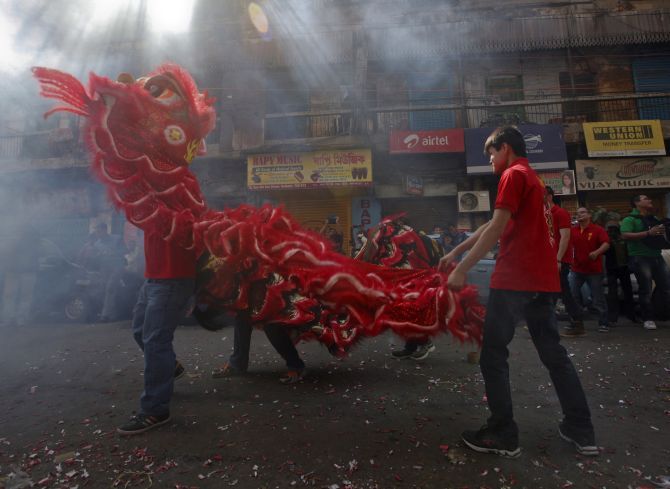 IMAGE: Members of the Chinese community perform a lion dance in a street as they celebrate the Chinese New Year in Kolkata. There are around 4,000 Chinese left in the city, down from 20,000 as most of them migrated to Hong Kong, Canada and Australia after the 1962 war. Photograph: Rupak De Chowdhuri/Reuters

He is not alone. The Chinese community in the city is one of the largest in the country and is apprehensive that the escalation of the conflict between the two Asian giants would hamper their lives and livelihood.

Lee (name changed), like other seniors of his community, has a fervent prayer for peace on his lips. He does not want a rerun of the 1962 Indo-China war, when he had to leave the city that he calls home following a backlash against the Chinese community.

"I was nine years old when the 1962 war took place. I vividly remember the day in October when some people pelted stones at our house and asked us to leave the country. A few days later, my father and uncle were detained by police. My mother took me and my younger brother away to Darjeeling, where we lived for a year," Lee said.

"We do not want a rerun of that situation. We do not want to speak about it," said Lee, who represents the third generation of his family in the city. He runs a footwear shop that stands cheek by jowl with similar ones owned by members of the Chinese Indian community in central Kolkata.

The community is apprehensive of even speaking about the escalation of tension between the two countries. Its members do not want to attract attention as they fear a backlash in view of the situation.

The undercurrents of tension are already apparent. The Galwan Valley violence in eastern Ladakh has broken the brittle peace between the two neighbouring countries, spurring hashtags like "BoycottChina" and India'senemyChina" on the social media and street protests.

"We do not want a war, we want peace. The memories of the 1962 war are still fresh for the elders in the community, who were persecuted during that period. Apart from a few, most of us were born and brought up here. We are Indians, it is just that our surnames are Chinese," Law said.

He said the members of the Chinese Indian community participate in Durga Puja, Diwali and Holi. "Our children hardly recognise their Chinese origin, neither can they speak Mandarin. They are more comfortable in Hindi and Bengali," Law said.

The Chinese migration to the city began in 1780, when it was a bustling town in British India. With growing livelihood opportunities, the settlers preferred to stay back and made it their second home.

"But the 1962 war changed everything. We were made to feel that this was not our country. We do not want to have that feeling once again.

"For the last several decades we have earned the respect of the people here. We do not want to be treated with suspicion now," P Chung of the Indian Chinese Youth Association said.

During the 1962 war, most of the members of the Chinese community were spared arrest but asked to report to the local police station regularly and stay within the limits of the China towns at Tangra and Territi Bazar in the city.

The restrictions were relaxed only in the early 1980s and withdrawn entirely in the late 1990s.

According to Law, the taboo of the 1962 war had a cascading effect on the Chinese Indian community. As job opportunities shrank, most of them diverted to restaurant, tannery and shoemaking business.

The owner of a Chinese restaurant in the city feels that any worsening of Indo-China relations adversely affects business as people avoid the restaurants in the famed China Town at Tangra, considering the area to be a "hub of anti-India activities".

"When the standoff at Doklam took place in 2017, the footfall at our restaurants dropped drastically," he said.

Local Trinamool Congress leader and councillor of the Tangra China Town area Swapan Sammaddar said he has assured the community of safety and security.

"When I visited China Town on Wednesday evening, most of the Chinese people there were scared due to the ongoing protests across the city. I told them not to worry and to remain calm," he said. 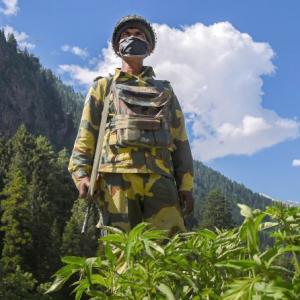 'Galwan Valley has always been India's'