Democratic Congresswoman Tulsi Gabbard, the first Hindu lawmaker in the US Congress, on Thursday ended her presidential campaign and offered her full support to former US vice president Joe Biden. The 38-year-old lawmaker's move leaves Biden and Senator Bernie Sanders as the final two candidates in the Democratic race.

"Today, I'm suspending my presidential campaign, and offering my full support to Vice President Joe Biden in his quest to bring our country together," she said in an online video message.

The Iraq war veteran said a day after Tuesday's primary results, it was clear that the party's primary voters have chosen Biden to be the person who will take on President Donald Trump in the general election.

Trump, 73, is seeking his re-election in the November presidential elections. Biden, 77, who is leading in pledged delegate counts against his nearest rival Sanders, 78, is few steps away from being the presumptive nominee of the Democratic party.

Endorsing Biden, Gabbard said, "Although I may not agree with the vice president on every issue, I know that he has a good heart and is motivated by his love for our country and the American people. I'm confident that he will lead our country guided by the spirit of aloha -- respect and compassion -- and thus help heal the divisiveness that has been tearing our country apart."

A large number of Indian-Americans were supporting Gabbard, a lawmaker from Hawaii, in her presidential run.

However, her presidential run failed to take off at any stage of her campaign. Most of the time, she was polling less than one per cent. She was also not able to make to the most of the stage of the Democratic primary debates.

"Our nation is facing an unprecedented global crisis that highlights the inextricable bonds of humanity, and how foreign policy and domestic policy are inseparable. We are all in this together and we must all rise to meet this moment -- in service to our country and our fellow man," Gabbard said. 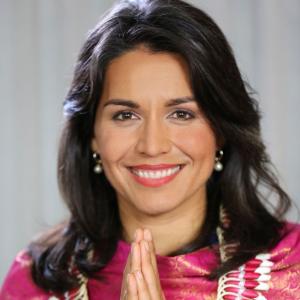