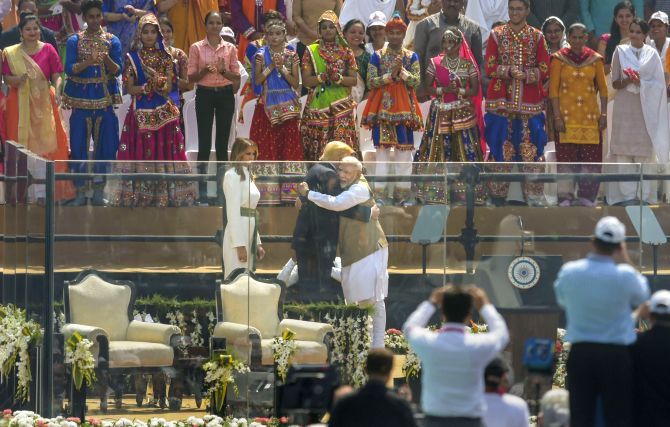 As the country geared itself up for the great Trump roadshow, India's finest astrologers should have urgently tackled the question of whether an invitation to visit India brings bad luck to majoritarian demagogues.

The trend is unquestionable.

Not long after Brazilian President Jair Bolsonaro agreed to be chief guest at the Republic Day celebrations, the rainy season cleared the smoke over the Amazon forests, and the country's space agency shared photographs that revealed that 3,700 square miles of the world's largest rainforest had been burned to the ground.

This propelled to global prime time the weakening of enforcement of environmental regulations under Bolsonaro, and he was pilloried in editorials and on Twitter worldwide.

Then, just a week or so before Bolsonaro arrived in New Delhi, his culture minister took it upon himself to borrow lines from a speech by Nazi propaganda chief Joseph Goebbels and record them while music from Adolf Hitler's favourite Wagnerian opera played in the background.

President Bolsonaro's insulting sexist and racist remarks rival the US president's -- hence his nickname as 'Trump of the Tropics' -- but this proved too much.

The minister was fired.

The term 'Teflon President' was coined to describe how blame or criticism never stuck to President Ronald Reagan decades ago, but he did not bathe in the stuff in the manner that Bolsonaro and Trump appear to do.

But as the visit to the Taj Mahal and Motera stadium loomed, the India jinx struck again.

President Trump, who had shrugged off impeachment, was hit by a political storm after seeking to influence the legal process so a friend of his, Roger Stone, could get a lighter sentence.

Their letter cited the DoJ's manual which calls on officials to 'be impartial and insulated from political influence'.

As the Democratic debates take a toll on that party's candidates, Trump still looks favoured to win, but the episode has been damaging even in a presidency that continually plumbs new lows of political propriety.

Given such a backdrop of ignominious behaviour in the world's large democracies, including India's, President Xi Jinping ought to find a ready audience worldwide for what is called 'Xi Jinping Thought on Socialism with Chinese Characteristics for a New Era'.

But no sooner had the sand been dusted off Xi's shoes after taking in the beautiful beach at Mamallapuram with Prime Minister Modi than a district election in Hong Kong strengthened the position of those canvassing for greater democracy there, a mysterious virus struck Wuhan in December, and a huge landslide win for the incumbent president in Taiwan in January was seen as a rebuke for China.

All is not well, to put it mildly, in the world's most populated and vainglorious democracy, either.

One could pick any number of indicators. but perhaps the most depressing this month was the Jammu and Kashmir high court's dismissal of the petition to free the Kashmir bar association president, Abdul Qayoom, who is 76 and in poor health.

Qayoom was detained under the Public Safety Act on August 5.

The continued detention of two former chief ministers more than six months after the abrogation of Article 370, amid claims that normalcy has returned, is difficult enough to accept, but preventive detention of a bar association president in poor health is incomprehensible.

"'ubjective satisfaction of the detaining authority to detain a person or not is not open to objective assessment by a court,' the judge declared.

'A court is not a proper forum to scrutinise the merits of administrative decision to detain a person.' Reading this left me at a loss for words.

The great legal scholar Gautam Bhatia, ordinarily prolific, writes that even merely discussing this judgment has a certain futility: 'There probably comes a point at which (it) is necessary only to complete the record, rather than present any new or interesting insight about the workings of the judiciary today.'

But there is more -- lots more.

The high court quotes the Greek playwright Sophocles to the effect that 'laws can never be enforced unless fear supports them.'

This bizarrely undemocratic sentiment is voiced in Sophocles's play Ajax, as Bhatia points out, in 'the aftermath of a destructive and unjustifiable war of aggression, where a soldier from the army of conquest massacres innocent civilians because he feels that he has not been credited enough for his role in the war.'

As so often, reading of judgments over the past few months that have come down heavily on the side the executive at the cost of personal liberties, especially in cases pertaining to Kashmir, one is left feeling let down.

On February 24, there was loud acclamations of two great democracies coming together, but think also of Qayoom and Kashmir and observe a minute's silence before discussing whether the 'millions' Trump expected to greet him on the streets of Ahmedabad will help re-elect him in November.

With any luck, the Delhi jinx will continue. 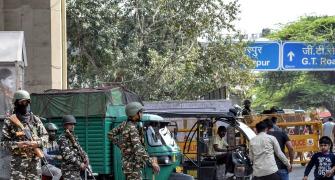 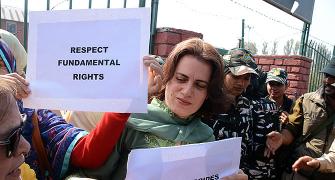