The new French President Francois Hollande has pledged to continue France's strategic partnership with India with same vigour as his predecessors Jacques Chirac and Nikolas Sarkozy who belonged to rival parties.

Hollande expressed this sentiment during his first meeting with Prime Minister Manmohan Singh on the sidelines of the G20 summit at Los Cabos in Mexico after recently winning the presidential elections defeating Sarkozy. Singh also congratulated Hollande on winning the elections.

Official sources said on Wednesday that the two leaders discussed Indo-French nuclear ties and referred to the progress in the cooperation in building the world's largest nuclear plant at Jaitapur (6 x 1650 mw) in Maharashtra.

Putin was told by Singh that the first two units (1000 mw each) of the project are on track and that the discussions are underway for the third and fourth units for which the Russian side has to come back with further details.

Putin and Singh shared the view that the two countries needed to work together more intensely to augment their traditional defence cooperation. It was felt that India and Russia will have to work out a long-term arrangement in areas like defence cooperation to avoid situations of repeated signing of MoUs.

This will ensure there are no delays in projects like in key areas of defence.

Official sources said that during discussions on the Jaitapur nuclear plant, Singh and Hollande were confident that the ongoing discussions will reach an early conclusion.

The issue of India's bid to seek membership of the elite 46-nation nuclear club Nuclear Suppliers Group also came up during discussions Singh had with the Russian and the French leaders.

Both Russia and France have declared their support for India's candidature for NSG. The PM also had brief meetings with British, Canadian and Australian Premiers David Cameron, Stephen Harper and Julia Gillard respectively. 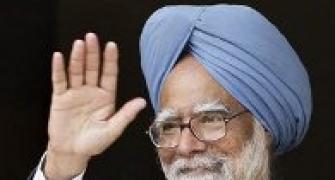 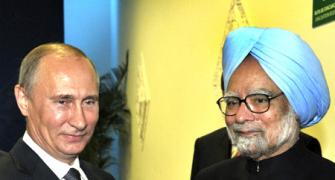 All nations must focus on growth: Manmohan Singh 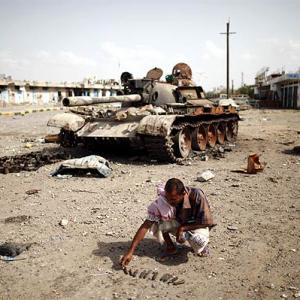