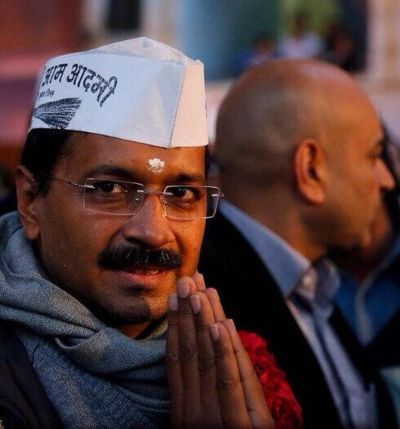 Between meeting party volunteers and clicking pictures with them, an upbeat AAP chief Arvind Kejriwal on Monday said he was confident of his party winning absolute majority in the Delhi Assembly elections.

A day before the counting of votes, Kejriwal met a large number of party volunteers and supporters of his New Delhi constituency at the Constitution Club here at around 6 pm.

"Fully confident of getting absolute majority. The picture will become clear tomorrow," Kejriwal told PTI even as he obliged a group of women who requested for a photo with him.

"All credit goes to the people and our work during the 49-day government," he added with a reassuring smile.

If the jubilant mood of the volunteers was anything to go by, AAP looks all but certain to form the next government in Delhi with all exit polls going in favour of the party.

Later, addressing the assembled volunteers, Kejriwal said he was there to meet and click pictures but "not selfies" with them.

"I would like to thank you all for your support. I am here to meet you today. Click as many pictures as you would like to but not selfies as it will take a lot of time," he said.

Following his announcement, people went up to the stage in batches of five and clicked pictures with him sitting in the centre.

A group of women from a slum situated off South Avenue were all smiles after managing to get a snap with the "future CM".

"We have given a chance to everyone in the past. So why not him? We strongly believe he will work for us. He has visited us in the slum many times in the past," said 60-year-old Safiqua.

Kejriwal is expected to reach the Patel Nagar office in the morning tomorrow and address workers after the results are declared.

The party has made elaborate arrangements at the three-storey office and has put up several LCD screens for showing live updates of the counting. Don't challenge exit polls, but we are confident: BJP 'Is your faith so fragile that a mere film can provoke mindless outrage?'