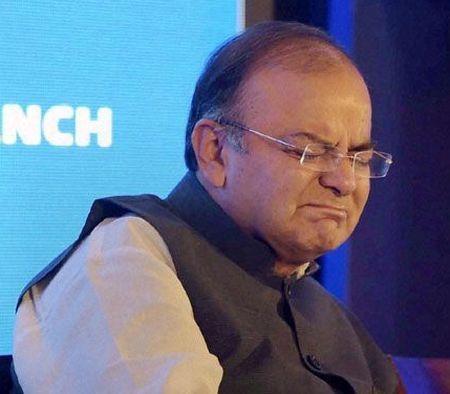 Finance Minister Arun Jaitley on Monday met Congress leaders in a bid to sort out differences for passage of the Goods and Services Tax bill in Rajya Sabha and both sides agreed to meet further as the talks were inconclusive.

The government is keen to get the bill passed in this session to facilitate the roll out of the measure from April next year. With the houses, particularly Rajya Sabha doing minimal business in the winter session, the government has not been able to push through its legislative agenda including GST.

The meeting on Monday came as the government decided to make a fresh bid to break the logjam. External Affairs Minister Sushma Swaraj and Chief whip of Congress Jyotiraditya Scindia also joined the consultations later.

At the hour-long luncheon meeting in Naidu’s office in Parliament, both sides stated their respective positions after which  Naidu merely said “we will continue to meet”.

The meeting over the GST happens in the backdrop of a campaign of Congress in Parliament over National Herald case.

While the main Opposition has rejected the charge that it was blocking the GST bill because of the court summons to party president Sonia Gandhi and her deputy Rahul Gandhi in the National Herald case, while the Bharatiya Janata Party continues to insist there is a link between the two developments.

Government sources said that the Modi government is inclined to take Congress concerns on board for passage of the GST bill, a comprehensive indirect tax reform, which will subsume all indirect taxes including excise and sales tax.

“But it all depends on whether Congress is interested in the passage of the GST bill or not. As far as provisions are concerned, there are not much differences left now after the Arvind Subramanian report,” the sources said adding nothing much can be done if the Congress and Rahul Gandhi set their mind against passage.

In Monday’s meeting, Jaitely made it clear that it is not feasible to put the tax cap in the Constitutional Amendment Bill while there is a need to talk to manufacturing states including All India Anna Dravida Munnetra Kazhagam ruled Tamil Nadu for removal of one per cent additional tax on goods.

“The meetings will continue. Union ministers will also meet Leader of Congress in Lok Sabha Mallikarjun Kharge,” said a source. Jaitley had also spoken to some Congress leaders on the phone on Sunday.

The main opposition party, Congress, has been demanding a simple GST and scrapping of the proposed levy of one per cent additional tax on goods.

Congress has also been demanding that the rate be part of the Constitution Amendment Bill besides seeking an independent quasi judicial grievance redress body instead of a GST council proposed by the government.

In recommendations that could help in breaking the GST logjam, the panel headed by Chief Economic Advisor Arvind Subramanian had in its report on December 4 suggested dropping additional one per cent tax on inter-state sales over and above the Goods and Services Tax rate.

The panel, however, did not favour putting the rate of GST, which seeks to replace all indirect taxes including excise, service tax and sales tax, in the Constitutional Amendment Bill.

The recommendations seem to suggest a middle-path approach in the deadlock between the Congress and the government, which didn’t want the GST rate to be part of the bill as it would require two-third majority approval of Parliament for any change in future rates for any product.

The government wants the GST bill to be approved in the current session of Parliament to meet the April 1, 2016, roll out deadline.

Jaitley had however insisted that the three suggestions made by the Congress now made go “contrary to” what Chidambaram and Pranab Mukherjee had presented before Parliament and alleged that they were “clearly afterthoughts in order to delay the GST”.

“I wish and pray that the GST (issue) is delinked (from the National Herald case),” he had said when asked whether he sees any link Congress protest on GST and National Herald issues.

Rejecting the charge, Chidambaram said the ruling party was making a “bizarre link” and insisted the Congress has raised “genuine concerns” on the GST.