Day 47: Another death in the Valley; terror attack on security forces 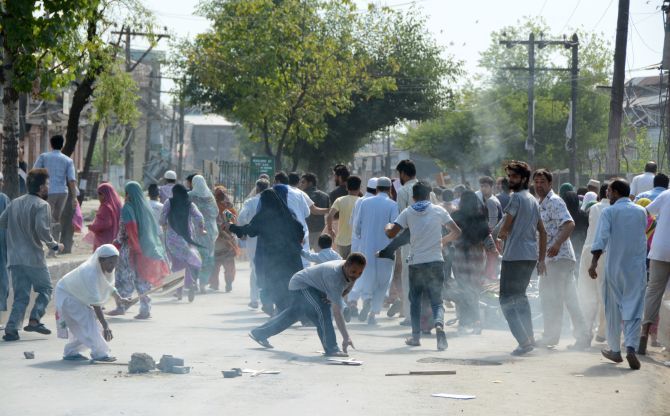 On a day Union Home Minister Rajnath Singh was in the Kashmir Valley where life remained paralysed for the 47th consecutive day, a youth died in a clash with security forces while 18 security personnel, including three officers, were injured in a terrorist attack.

Curfew was in force in parts of Srinagar and two other towns even as restrictions and separatist-sponsored shutdown continued to paralyse life elsewhere in the valley.

In a clash between stone-pelting mobs and security forces in Pohu village of Pulwama district on Wednesday morning, a youth died due to pellet injuries, raising the toll in the ongoing unrest in Kashmir to 66.

"Aamir Bashir, who had pellet injuries in his chest, was brought to SMHS Hospital here but the doctors declared him brought dead," a police official said.

Several other persons sustained injuries in the clashes.

Later in the day, terrorists targeted security personnel near the Degree College in Pulwama town by hurling a grenade and then firing. 18 security personnel, including a Central Reserve Police Force Commandant, an Additional Superintendent of Police and a Deputy Superintendent of Police, were injured in the attack after which militants fled from the spot.

District Magistrate of Pulwama Muneer-ul-Islam said restrictions will be imposed in all parts of the district from 4 am on Thursday till further orders.

"No person, except ill persons or otherwise allowed by the Magistrates, shall be allowed to move," an order issued by the District Magistrate said. IMAGE: A protester in Srinagar throws a tear gas shell back at cops.

Meanwhile, curfew was in force in five police station areas of downtown Srinagar and Batamaloo and Maisuma areas in the uptown, a police official said.

In south Kashmir, curfew continued in Anantnag town and was imposed in Pampore town today to maintain law and order.

On Tuesday, the authorities had lifted curfew from most areas of Srinagar in view of the improving situation.

However, restrictions on assembly of four or more people under Section 144 of the CrPC continued in rest of the Valley.
Due to the curfew, restrictions and separatist-sponsored strike, normal life remained paralysed for the 47th consecutive day.

Shops, private offices, educational institutions and petrol pumps remained closed while public transport continued to be off roads. The attendance in government offices and banks was also affected, the official said.

The separatist camp has extended the strike till September 1.