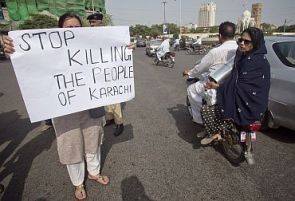 At least four people have been killed and eight others injured in two separate explosions in Pakistan's commercial capital Karachi, officials said.

Police said that a bomb planted in a motorcycle was detonated when Khan's convoy was about to enter the Lyari Expressway entry point in Gulshan-e-Iqbal Saturday evening.

"Eight people in the convoy were injured including Matanat and his guard who later died in hospital," Deputy Superintendent Nasir Lodhi said.

"The motive of the attack is yet not known," he said.

Interestingly, the commissioner's vehicle was followed by the squad of the CID SSP Chaudhry Aslam Khan who has been in the past the target of Taliban and other extremist outfits.

"It could be a mistaken identity but Chaudhry Aslam was not present in the squad," Lodhi said.

In another incident, three militants were killed in an explosion in the congested Patel Para locality in the city.

"Apparently the victims were making bombs when one bomb detonated killing three of them and badly damaging the apartment yesterday," an official said.

Bomb disposal officials said explosion was the result of between five and six kilogram’s of explosive material.

Batteries, ball bearings and nails -- common elements used in home-made bombs -- have been discovered from the scene.

One of the injured has been taken into custody for further interrogation, police said.

Chief of the Counter-Terrorism and Financial Crime Unit of the CID, SSP Raja Omer Khattab, said the flat was being used as a terrorists hideout but it was yet to ascertained which group was using it.

He said clothes of women and children were found inside the flat but no woman was present there at the time of blast.