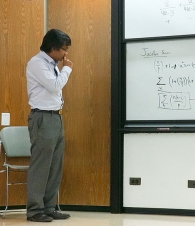 Four Indian-American professors are among 13 mathematicians, theoretical physicists and theoretical computer scientists selected for the Simons Investigators awards for their cutting edge research.

The four professors -- Kannan Soundararajan, Rajeev Alur, Salil P Vadhan and Senthil Todadri -- will receive $100,000 a year for five years for long-term research, with the possibility of renewal for five additional years.

The awards for 2013 were announced by Simons Foundation, a New York-based non-profit organisation with a mission to advance the frontiers of research in mathematics and basic sciences.

Soundararajan, a professor of mathematics at Stanford University, "is one of the world's leaders in analytic number theory and related areas", the Foundation said in a statement.

The India-born professor represented the country at the International Mathematical Olympiad in 1991 and won a silver medal. A Sloan Foundation Fellow, Soundararajan has an undergraduate degree from University of Michigan and a PhD from Princeton.

"His work is focused on understanding the zeros and value distribution of L-functions, and on analysing the behaviour of multiplicative functions," it said.

Two of the three computer science awards were given to Indian-Americans Alur and Vadhan.

Alur, the Zisman Family Professor in the department of information and computer science at the University of Pennsylvania, "is a top researcher in formal modelling and algorithmic analysis of computer systems".

"A number of automata and logics introduced by him have now become standard models with great impact on both the theory and practice of verification," the Foundation said.

Alur has bachelor and PhD degrees in computer science from IIT-Kanpur and Stanford University.

Vadhan, the Vicky Joseph Professor of Computer Science and Applied Mathematics at Harvard University, was recognised for his "original and influential papers on computational complexity and cryptography".

Todadri, a professor of physics at MIT and Distinguished Research Chair at the Perimeter Institute of Physics, was one of six Simons grant-winners in that discipline.

Todadri has a PhD from Yale and an undergraduate degree from IIT-Kanpur.