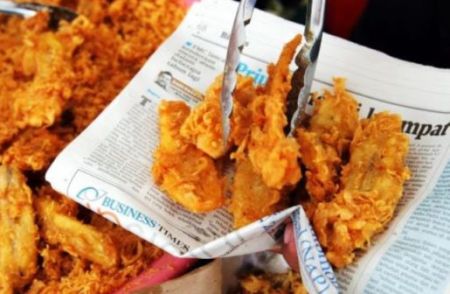 Using newspapers to pack or serve food -- a common practice among street vendors -- is a safety hazard, according to the country’s food regulatory body which has warned that consumers are slowly being poisoned by cancer-causing agents and microbes.

“Wrapping food in newspapers is an unhealthy practice and the consumption of such food is injurious to health, even if the food has been cooked hygienically,” The Food Safety and Standards Authority of India said in an advisory.

This comes after Union Minister of Health and Family Welfare J P Nadda had directed FSSAI to issue an advisory restricting the use of newspapers as food packaging material.

Beside chemical contaminants, presence of pathogenic microorganisms in used newspapers also pose potential risk to human health, according to the advisory.

Newspapers and paper or cardboard boxes made of recycled paper may be contaminated with metallic contaminants, mineral oils and harmful chemicals like the phthalates which can cause digestive problems and also lead to severe toxicity.

Older people, teenagers, children and people with compromised vital organs and immune systems are at a greater risk of acquiring cancer-related health complications, if they are exposed to food packed in such material.

Newspapers should not be used to wrap, cover and serve food or to absorb excess oil from fried food.

There is an urgent need to discourage the use of newspaper as food packaging material by creating awareness among businesses, especially unorganised food business operators and consumers on its harmful effects.

Suitable steps need to be taken to restrict control and use of newspapers for packing food material.

The FSSAI has directed Commissioners of Food Safety of all States/Union Territories to initiate systematic campaigns for generating awareness among all the stakeholders to discourage the use of newspapers for packing, serving and storing food items.

Source: PTI© Copyright 2020 PTI. All rights reserved. Republication or redistribution of PTI content, including by framing or similar means, is expressly prohibited without the prior written consent.
Related News: Food Safety and Standards Authority of India, Union Minister of Health and Family Welfare J P Nadda, Commissioners of Food Safety of all, Union Territories
SHARE THIS STORY
Print this article