Navy chief on submarine survivors: Fear the worst, hope for the best 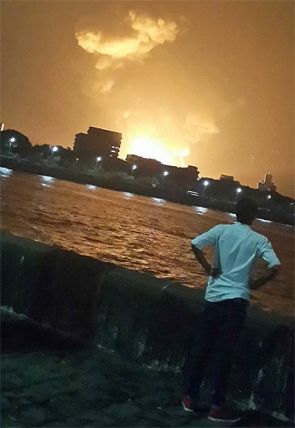 An Indian Navy submarine caught fire after an explosion and sank in Mumbai late on Tuesday night, with 18 personnel on board, including three officers, feared dead.

An explosion resulting in a major fire took place on board the INS Sindhurakshak, a Kilo class submarine of the Indian Navy, shortly after midnight.

Navy Chief D K Joshi said he does not rule out possibility of sabotage but said indications at this time do not support such a theory.

“While we can hope for the best, we have to prepare for the worst,” the Navy chief said on the fate of 18 missing officers and sailors onboard Sindhurakshak submarine.

"The ordinance on board the INS Sindhurakshak may have exploded. How much of it has exploded will only be ascertained once the salvage operations are over. The ordinance on board has been underwater for 12 hours. The submarine had explosives, fuel, oxygen, batteries, so the explosion could have been caused by any of it,” the navy chief said.

“Because of the intensity of the heat, the hatches have become fused with the hold. But we cannot lose hope for those trapped inside. They may have found an air pocket -- a watertight section, however unlikely it may be. Unless we get into the hold, we will not know. Submarine accidents are always known to be catastrophic,” he added.

Both Antony and Chavan expressed sorrow at the "shocking tragedy". The chief of naval staff and the state chief secretary had accompanied them to the visit.

Antony said the government would provide relief to the family members of sailors who are killed in the accident. He also said an inquiry has been ordered.

Fire tenders from the Naval dockyard as well as the Mumbai fire brigade were immediately pressed into action, he said.

However, due to the explosion, the submarine has submerged at the dock, with only a portion visible above the surface, a defence statement said.

It said efforts are on to ascertain the safety of the personnel and salvage the submarine.

The submarine had returned after a major upgrade programme in Russia 3-4 months ago and is armed with a potent weapons package including the anti-ship Club missiles.

The INS Sindhurakshak was not on active duty at the time of the accident, Navy sources said.

The incident has come at a time when the Navy is facing a situation of depleting submarine fleet.

Our Bureau adds: According to spacewar.com in May, 'India's Russian-built submarine the INS Sindhurakshak arrived at its home port Mumbai after an overhaul including structural hull upgrades at the Zvezdochka shipyard' in Russia.

'The INS Sindhurakshak -- a Russian Type 877EKM submarine, Sindhughosh class for the Indian navy -- was constructed in Admiralteiskie Verfi shipyard in St Petersburg in 1997,' the site added.

'It's one of 10 Kilo class submarines constructed in Russia's shipyards for the Indian Navy from 1985 to 2000, a report by TV-Novosti said in January.

'Zvezdochka shipyard, in Severodvinsk, near Archangel on Russia's western Arctic Ocean coast, signed the retrofit deal in June 2010 and the submarine arrived the following August.

'The overhaul and retrofit for the 2,300-ton vessel reportedly cost around $80 million, TV-Novosti said.

'The submarine was handed over to the Indian Navy in Severodvinsk January 26 -- India's Republic Day -- and immediately left for Mumbai, a report by Russia and Indian Report  said.

'The Sindhurakshak is armed with the latest export variant of the Russian-made submarine-specific Club-S multi-role cruise missile system capable of hitting targets more than 150 miles away,' the report added.

According to the russiandefence.net web site, 'The temperature is plus 4 Celsius under the ice and minus 10 above it, but it’s somewhat hot inside the robust hull. The crew of the INS Sindhurakshak has already made the revived ship its home and is now taking it south to its home station and combat duty area from the icy embrace of the White Sea.'

'From the Russian shipyard,' the web site added, 'it normally takes the submarine about two months to reach its base site in Visakhapatnam, where the Eastern Naval Command of the Indian Navy is headquartered. This time, however, things are different, because the Indian submarine and its crew are travelling in the icy conditions of the NorthernSea route for the first time.

'The INS Sindhurakshak is the fifth Indian submarine of the 877EKM project built and modernised in Russia. The contract for overhaul and modernisation was signed in June 2010 and in August, the ship arrived in Severodvinsk and was accepted by Zvezdochka Ship Repair Centre,' it added.

'Under the contract, the submarine has been armed with Club S anti-ship missiles; more than 10 Indian and imported systems have been mounted on the submarine, including the USHUS hydro-acoustic unit, the CCS-MK-2 communications system and the Porpoise radar installation.

'The INS Sindhurakshak has also had its cooling systems updated and undergone other operations to improve the submarine’s combat characteristics and safety.

'It was set afloat in June 2012 once the ship house operations had been completed,' the russiandefence.net web site noted.

'It successfully passed sea trials in the White Sea in November–December 2012 and tested its missiles and torpedoes. According to unofficial information, which was confirmed by Rossiyskaya Gazeta’s sources, both the sea and ground targets were hit at the first try.'

'“The Indian Navy is our traditional priority partner,” Zvezdochka General Director Vladimir Nikitin said. “Over the last 15 years, we have repaired and modernised five Indian Kilo class submarines, supplied spare parts and equipment and provided maintenance of the ships in India”.’ 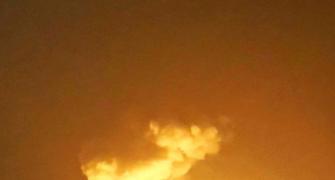 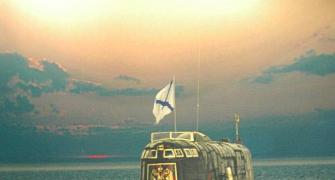 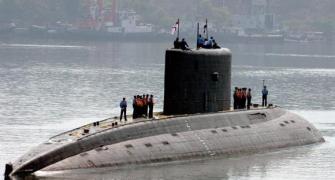 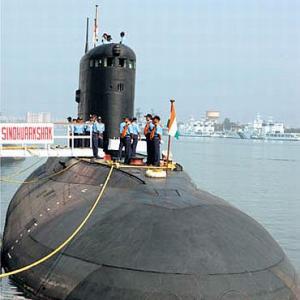 Sindhurakshak mishap due to explosion of battery