The girl tried to immolate herself near the chief minister's residence in Lucknow on Sunday.
Six policemen have been suspended. IMAGE: The girl and her family members were stopped by police personnel while attempting self-immolation outside Chief Minister Yogi Adityanath's residence in Lucknow on Sunday. Photograph: ANI

The father of an 18-year-old woman, who alleged that she was raped by Bharatiya Janata Party MLA Kuldeep Singh Sengar and his brothers, on Monday died in custody in Unnao, prompting her to put the blame on the lawmaker, who rejected the charge as a conspiracy and said the complainant belonged to 'low class'.

The alleged victim's father, aged around 50, was rushed to a hospital from the district jail on Sunday night and died during treatment on Monday.

He was arrested on April 5 under the Arms Act, police officials said. The news of his death spread like wildfire with opposition parties slamming the Bharatiya Janata Party government even as Chief Minister Yogi Adityanath promised action against the guilty.

Sengar maintained the allegations against him were part of a conspiracy.

"They belong to a low status family ('nimn star ke log hain')...This is a conspiracy by my opponents," Sengar told reporters.

Chief Minister Adityanath sought a report on the incident and assured those found guilty will be punished.

"The incident is unfortunate. ADG, Lucknow, has been asked to give his report and probe the matter, and if any policeman is found guilty, action will be taken. Whosoever is guilty will not be spared," Adityanath said.

District Magistrate Ravi Kumar N G said that the post-mortem examination of the victim would be conducted by a panel of doctors to ascertain the exact cause of death.

After her father's death, the gang-rape victim alleged that he was 'killed at the behest of the BJP MLA' inside the jail.

"We were getting threats and they killed my father," she told reporters.

UP cabinet minister and government spokesman Srikant Sharma told reporters in Unnao that a magisterial probe had been ordered.

"If the allegations are true, it's a very unfortunate incident. For a fair probe, the inquiry has been shifted to Lucknow from Unnao. The state government is committed to ensuring justice to the victim's family," he said.

She said one more police officer and four constables have also been suspended.

WATCH: The girl narrates her ordeal

Director General of Police O P Singh said a team of Lucknow police had been constituted to probe the entire matter.

"Whosoever is found guilty, strict action will be taken. None will be spared,” he said.

Pappu was arrested on April 5 under the Arms Act after he was allegedly beaten up by Anil Singh, the MLA's brother.

The daughter of the deceased had on Sunday tried to immolate herself near the chief minister's residence in Lucknow, alleging that she was raped by the BJP MLA and his brothers.

The immolation bid was, however, foiled by the police.

Attacking the BJP government, Samajwadi Party supremo Akhilesh Yadav said in a tweet, ‘In (UP) state a girl, going for coaching classes is being shot dead...Another girl accusing BJP MLA of gangrape tried to immolate herself in front of CM's residence after disappointment from the government. Is this fear of government of 'encounter' that instead of criminals, woman are getting terrified?(sic)’.

Gautampalli police station inspector Vijaysen Singh said, "The incident took place outside the Golf Club gate (near the official residence of the chief minister), where the girl from Unnao alleged that she was raped. She also alleged that the Unnao police had not registered a case against the BJP MLA despite her complaint and no action was taken." 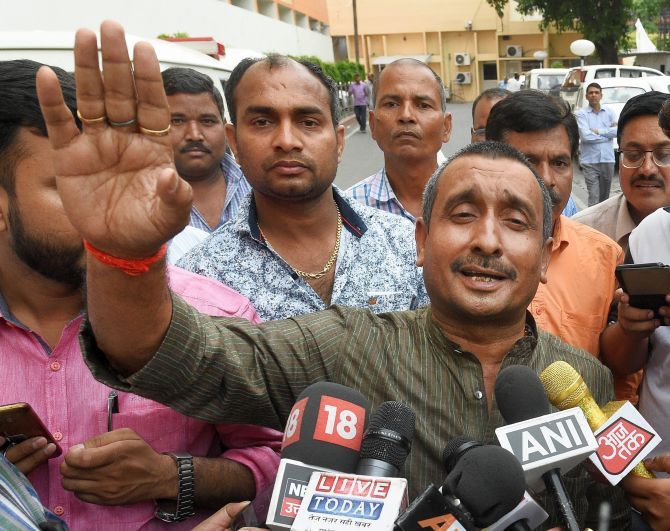 Sengar represents the Bangermau constituency in Unnao district, around 90 km from the state capital.

The police inspector said the girl was made to appear before Rajiv Krishan, the Additional Director General of Police, Lucknow, who ordered a probe by the Lucknow police.

When contacted, Sengar refuted the allegations against him and said, "It is a conspiracy hatched by my political opponents to tarnish my image and damage my reputation...I have no problem with any probe. Let a probe be conducted, and the guilty be given the stringent punishment. If I am found guilty in the probe, I am ready to face punishment."

"Save the girl, get yourself killed. A young girl accuses a BJP MLA of rape. The police, instead of arresting the MLA, take the girl's father into custody. Immediately after that he dies in police custody," the Congress president tweeted in Hindi.

"Meanwhile, the accused MLA is still moving around freely," he added. 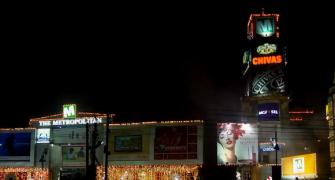 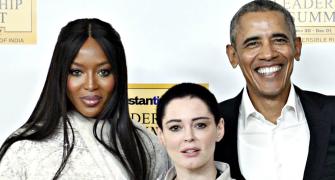 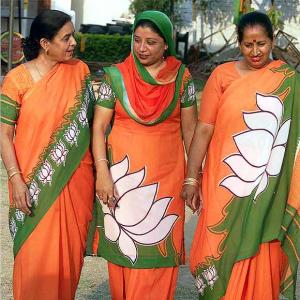