Farmer leaders ready to resume talks with govt on Dec 29

The protesting farmer unions on Saturday decided to resume their dialogue with the Centre, and proposed December 29 for the next round of talks to end the deadlock over the three newly enacted farm laws, but made it clear that the modalities for its repeal and guarantee for minimum support price (MSP) should be part of the agenda. The decision by the agitating farmers to hold another round of talks with the government was taken at a meeting of Sanyukt Kisan Morcha (SKM), an umbrella body of 40 farmer unions protesting at various Delhi border points against the farm laws for more than a month.

The decision also came a day after Prime Minister Narendra Modi asserted that his government is willing to hold talks with all, including its staunch critics, as long as they are based on farm issues, facts and logic, and squarely blamed political rivals for the stalemate in the Centre-farmer unions talks.

In a letter to joint secretary in the Ministry of Agriculture and Farmers' Welfare Vivek Aggarwal, the Morcha said, 'We propose that the next meeting between the farmers' representatives and the Government of India be held on December 29 2020 at 11 am.'

"As the government is willing to hold talks with us, and asking for a date and about our issues, we have proposed to hold a dialogue on December 29.

"Now, the ball is in the government's court, when it calls us for talks," Bhartiya Kisan Union leader Rakesh Tikait told PTI.

Addressing a press conference, farmer leaders said the modalities for the repeal of three farm laws and guarantee for MSP -- at which the government procures crops from farmers -- should be part of the agenda for resuming talks with the government.

The farmers also decided to intensify their agitation, with farmer leader Darshan Pal saying that a tractor march will be held on Kundli-Manesar-Palwal highway on December 30.

He asked people from Delhi and other parts of country to come and celebrate New Year with protesting farmers.

Another farmer leader, Rajinder Singh, said, "We will march from Singhu to Tikri to KMP. We ask farmers from surrounding states to come in huge numbers in their trolleys and tractors.

"If the govt doesn't want us to block the KMP highway, then they better announce the repeal of the three farm laws."

Earlier this week, Aggarwal had written to the 40 protesting unions and invited them for fresh talks, but made it clear that it would not be 'logical' to include in the agenda any new demand related to the MSP, which is out of the purview of the three new farm laws.

Responding to the government's letter, SKM in its communication said, 'unfortunately, your (Aggarwal's) letter continues the government's attempt to mislead the public by suppressing true facts about the deliberations in the previous meetings.

'We have consistently demanded the repeal of the three Central Farm Acts, whereas the government has distorted our position as if we were asking for amendments to these Acts.'

The letter further added that 'if you are sincere about respectfully listening to farmers, as you say in your letter, the government must not indulge in misinformation about the previous meetings.

'The campaign launched by the entire state machinery to defame and malign the farmers' movement must stop forthwith.'

"I am not stuck with Fevicol with the NDA. Today, I separate myself from the NDA," Beniwal said while addressing a farmers' rally in Shahjahanpur in Alwar district.

Attacking the Congress, the BJP alleged that the opposition party wants to convert peaceful farmers' protest into 'bloodshed', and accused the Punjab government of orchestrating an attack on BJP workers in the state during an event to celebrate former Prime Minister Atal Bihari Vajpayee's birthday.

"If there is any bloodshed or loss (of life) in the coming days, then the Congress and the left parties will be responsible," BJP general secretary Dushyant Gautam told a press conference, alleging that Congress' Ludhiana MP Ravneet Singh Bittu in a media statement had said that the farmers' protest will not end 'and to achieve our objective we can even pile up bodies, shed blood and go to any extent'.

In Bengaluru, former Karnataka chief minister H D Kumaraswamy said India's image is taking a hit globally because of the ongoing farmers' protest and urged Modi to end the stalemate.

He also asked farmers to have an open mind towards experimenting with the new laws, 'as suggested by Union Defence Minister Rajnath Singh'.

Thousands of farmers have been camping at three Delhi border points -- Singhu, Tikri and Ghazipur -- for nearly a month, demanding the repeal of these farm laws, enacted in September, and a legal guarantee on minimum support price.

While the government has presented these laws as major reforms aimed at helping farmers, protesting unions have maintained these acts will leave them at the mercy of big corporates by weakening the mandi and MSP systems.

Also on Saturday, former Haryana chief minister Bhupinder Hooda reiterated his stand of bringing a no-confidence motion against the government in the assembly, saying 'many Independent MLAs have withdrawn support from the government'.

Two Independent MLAs -- Sombir Sangwan and Balraj Kundu -- have withdrawn support to the state government, while many of the 10 legislators of the Jannayak Janta Party (JJP) have openly come out in support of the farmers protesting against the Centre's three farm laws.

"In this battle between the farmers and the government, many legislators of coalition partner JJP have also spoken in support of the farmers. It is clear that the BJP-JJP coalition government has lost not only support from the public, but also the confidence of its own legislators," Hooda said. 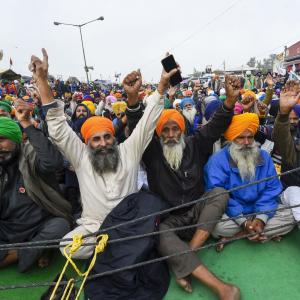