Carrying flags and shouting slogans, thousands of farmers gathered at various entry points into the national capital in a determined bid to push their way through as part of their ‘Delhi Chalo' march against the new farm laws while police blocked them with barricades, teargas shells and batons. 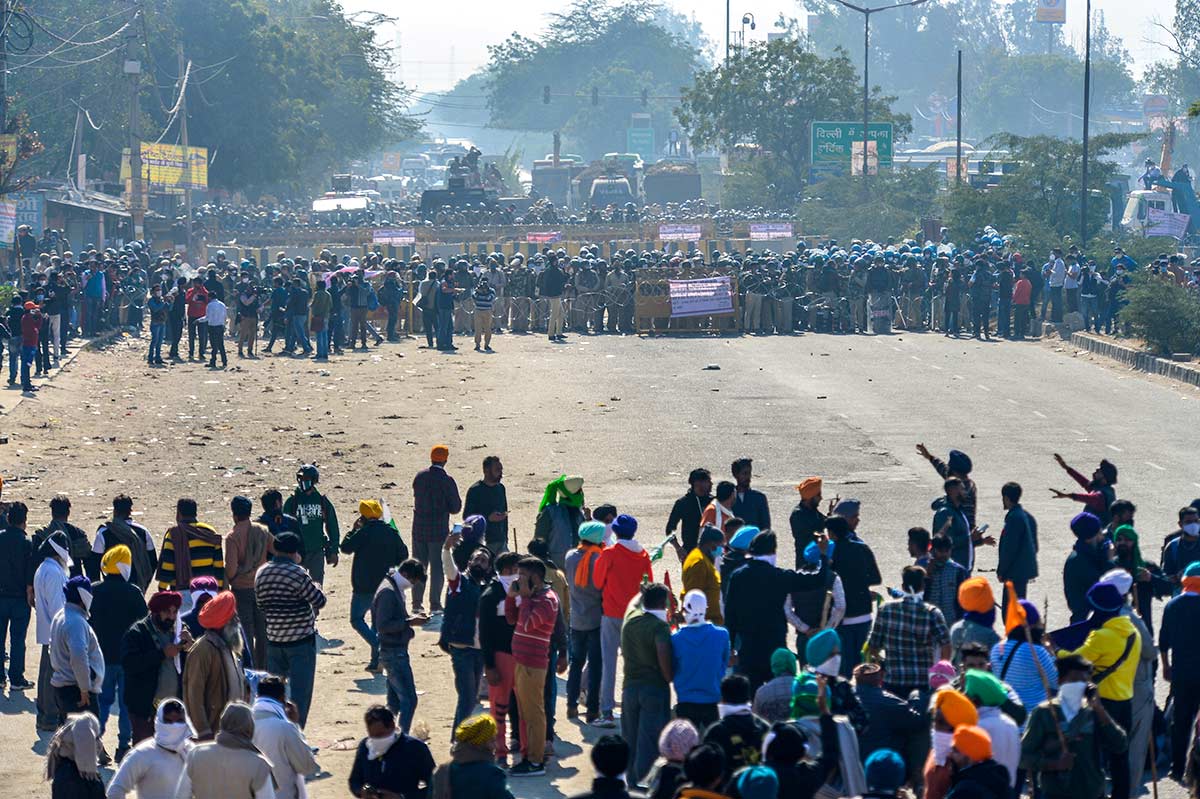 Clashes broke out at multiple places and Delhi's borders resembled a virtual battle zone with restless crowds of farmers, mostly from Punjab and Haryana, milling around and a sea of police personnel keeping them at bay. Drones circled the air and plumes of smoke from teargas shells could be seen from far.

Beyond the border points, the tension spilled over on highways where groups of farmers squatted on the road, and stood in trucks and tractors, waiting impatiently to make their way to the national capital.

At the Singhu border, one of the main routes used to access the city from Punjab, farmers could be seen talking to a battery of police personnel across barbed wire fencing stretching across the road. Multi-layer barricading, including sand laden trucks and water cannons, was put up to block the farmers.

Delhi Police used teargas to disperse farmers who had reached the Singhu border. At the Tigri border, some kilometres away, some farmers used a tractor to pull away a truck placed as a barricade to prevent them from entering the city. Water cannons were used against the farmers.

"We are using teargas to disperse protesting farmers. We are also informing them that in view of the COVID-19 pandemic, any kind of rally and dharna is not allowed," a Delhi Police official said.

"They have been denied permission and legal action will be taken against them if they still try to enter Delhi," he added. 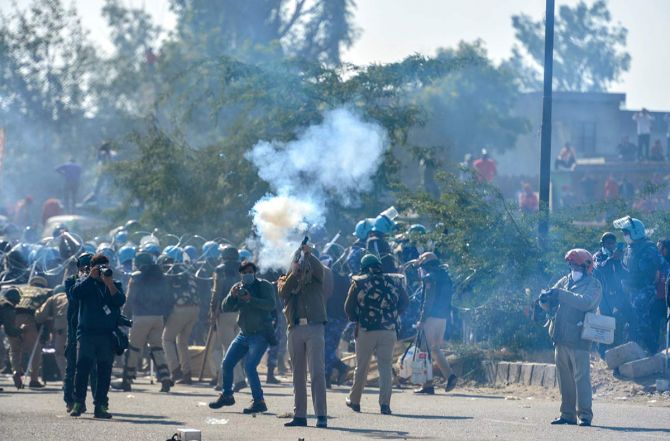 Delhi Police sought permission from the city's Aam Aadmi Party government to use the city's nine stadiums as temporary jails for farmers arrested or detained but this was denied.

Delhi Home Minister Satyendar Jain said every Indian citizen has the right to protest peacefully for which they cannot be put in jails. In a letter to the principal home secretary, Jain said the Central government should accept the demands of farmers, adding that putting farmers in jails was not a solution.

Drones were being by security personnel to keep strict vigil on the movement of protesters in bordering areas. Farmers dug in their heels as police made announcements over loudspeakers asking them to retreat.

"We will enter Delhi. We will get these anti-farmer laws repealed. We were welcomed at the national capital by teargas shells lobbed by Delhi police," said a farmer from Fatehgarh Sahib in Punjab who was among those who managed to reach the Singhu border. Farmers in a group that had reached close to the Singhu border said they had taken night halts at various points and broken police barriers in Panipat, Haryana, about 100 km from Delhi. While a group of farmers from Punjab were the first to reach there some farmers from Haryana joined them later.

A farmer who had reached the Haryana-Delhi border point in Sonipat asked why authorities were stopping them from holding a peaceful protest.

“Don't we have a democratic right to protest in a peaceful manner? Punjabis made supreme sacrifice for the freedom of this nation. Farmers meet the food needs of the nation, but today the Centre is behaving as if we are terrorists and has put thousands of security personnel to stop our peaceful march,” he said.

“We are not scared of the pandemic. We have bigger worries. We are worried about being discriminated against,” added another. Congress leaders Randeep Singh Surjewala and Pawan Khera met BKU leader Gautam Singh Charuni and others in Panipat on Friday morning and extended their full support to their stir against the farm laws.

“…Don't farmers have right over India's capital Delhi? Why so much hatred towards farmers?” Surjewala said in a tweet attacking the Centre.

Punjab chief minister Amarinder Singh said the voice of farmers cannot be "muzzled indefinitely" and asked the BJP-led Centre to immediately hold talks with them.

“Central govt needs to show statesmanship and accept the farmers' demand for assured MSP, which is the basic right of every farmer. If they can give verbal assurance I fail to understand why they can't make it a legal obligation of the GoI,” he said on Twitter. As the day progressed, so did the chaos on the roads leading to Delhi and at its border points.

Checking was also intensified at the Delhi-Gurgaon border, Faridabad border, the Kalindi Kunj border and other entryways, leading to massive jams. Authorities in Haryana imposed prohibitory orders under Section 144 of the Criminal Procedure Code (CrPC) in several parts of the state to prevent assembly of the protesters.

For those in Faridabad, Gurgaon and Noida, who work in Delhi, it was even tougher.

Delhi Metro authorities had earlier announced that services from neighbouring cities will remain suspended on Friday.

The farmers are demanding the repeal of the new farm laws, which, they said, should be replaced with another set of legislations framed after wider consultation with the stakeholders. They also want a guarantee on minimum support prices. 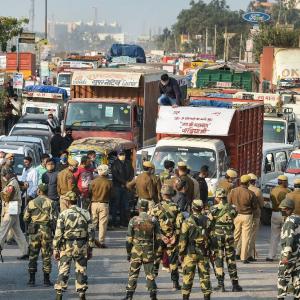